Cardinal Zen writes Open Letter to Cardinal Re on Vatican agreement with China ".. the guideline leaves room for objection of conscience..." 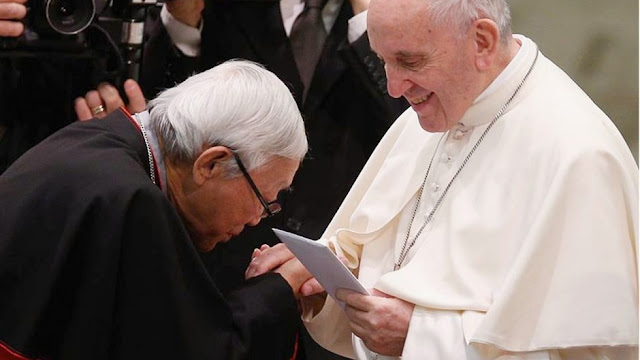 The emeritus bishop of Hong Kong, Cardinal Joseph Zen writes open letter to Cardinal Re of the Vatican. He asks to see evidence of Benedict XVI's having signed the provisional agreement with China. Card. Zen questions the Secretariat of State  Card. Pietro Parolin's, Secretary of State, understanding of the concept of "independent church" preached by China
In the open letter, published on March 1, 2020, the first Sunday of Lent, Card. Joseph Zen responds to the criticisms addressed to him by Card. Giovanni Battista Re. The dean of the College of Cardinals who had issued a letter criticizing the judgment of Cardinal Zen regarding the provisional agreement between the Vatican and China.
In a document on the "Pastoral Guidelines of the Holy See on the civil registration of the Clergy in China", it is admitted that priests and bishops can sign up for membership.
Full text of the letter by Cardinal Zen published on his blog in Italian, English and Chinese.

To His Eminence Cardinal John Baptist Re

Dean of the Collegium of Cardinals
Your Eminence,
Please allow me to address myself to you with an open letter for the sake of more speedy communication.
Yesterday (29 Feb), from the media, I came to know your letter of 26th February, its Protocol No. 1/2020 makes it look like the inaugural address of your high office as the Dean of the Collegium of Cardinals.
I admire your courage in venturing into problems you yourself acknowledge to be complex, thus, risking the prestige of your newly inaugurated high office. But then, we have nowadays this our “vice pope” capable to infuse such courage in many workers in the Holy See.
Now let’s come to your letter to which I try to answer briefly.
1. To clarify the position of John Paul II and Benedict XVI regarding Communism, it is enough for me to refer you to the booklet Last Conversations (p.161-162) (by the way, Pope Benedict sent a copy of the book to me with the dedication “in communion of prayer and thought”).
The reporter Peter Seewald asked: “Have you shared and supported actively the Ostpolitik of John Paul II?”
Benedict answered, “We used to talk about that. It was clear to us that this strategy pursued by Casaroli with very good intentions was a failure.
The new line pursued by John Paul II was fruit of his own personal experience, living under that regime.
Obviously, nobody could expect the Communism (in Europe) to collapse so soon. But anyway, instead of being conciliatory and accepting compromises, it was necessary to resist it forcefully.
This was the fundamental vision of John Paul II which I shared.”
2. If you want to prove to me that the recently signed agreement was already approved by Benedict XVI, you just have to show me the text of the agreement, which I am barred from seeing till now, and the archival evidence which you say you could verify. Then there remains to be explained why it was not signed at that time.
3. The so-called epochal change of the meaning of the word “independence” I am afraid might exist only in the head of the Most Eminent Secretary of State, maybe caused by an erroneous translation from Chinese by the young minutante of the Congregation for the Evangelization of Peoples, now probably the only Chinese in the office. (Actually, he bears part of the responsibility of the not less than 10 mistakes in the translation of Pope Benedict XVI’s Letter of 2007.)
But given the intelligence of His Eminence, I hesitated to believe that he could have been misled. It looks more probable that he willingly allowed himself to be cheated.
4. The last part of your letter seems rather confused to me.
What I have to say is: the facts are there for everybody to see.
I have strong evidence to believe that Parolin is manipulating the Holy Father, who always shows so much affection to me when we meet, but never answers my questions.
Now, there are guidelines coming from the Holy See which I could not understand. When many of my brothers in despair come to me for advice, I tell them: don’t criticize those who follow the guideline from Rome. But since the guideline leaves room for objection of conscience, you can quietly retire into the state of catacombs and don’t resist by force to any injustice, you could only suffer more losses. Am I wrong in all these?
5. I 100 percent agree with you when you invite to prayer. I was aware that even the Holy See recommended that traditional invocation to Our Lady: “Sub tuum praesidium” and the other to Archangel St. Michael.
Obviously, there is the “Oremus pro Pontifice,” which concludes with “et non tradat eum in animam inimicorum ejus.”
Wishing you more happy moments in your long service as Dean of the Collegium of Cardinals.
Yours,
Cardinal Zen

The First Sunday of Lent
Gospel according to Matthew (4:8-10)
Then the devil took him up to a very high mountain, and showed him all the kingdoms of the world in their magnificence, and he said to him, “All these I shall give to you, if you will prostrate yourself and worship me.” At this, Jesus said to him, “Get away, Satan! It is written: ‘The Lord, your God, shall you worship and him alone shall you serve.’”
Full Text Source: https://oldyosef.hkdavc.com/?p=1356 ( Official Website of Cardinal Zen)
Posted by Jesus Caritas Est at 11:34 AM