Chaldean Patriarch Cardinal Sako launches appeal: "Do not go out, stay at home" and "I invite you to follow through electronic media" 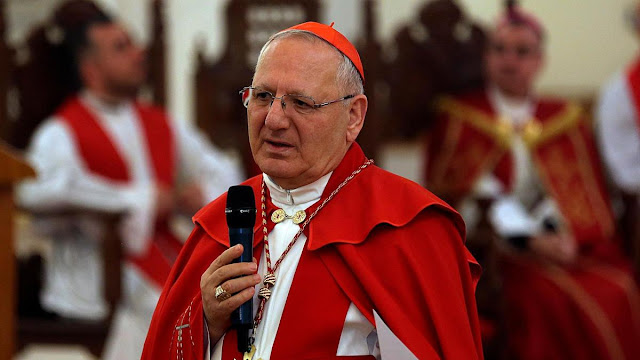 Coronavirus, Chaldean patriarch launches appeal: "Do not go out, stay at home"
Card. Sako speaks of "a tragic and difficult moment", invitation to adhere to prevention and containment measures. The vicar of southern Arabia suspends masses for a month in the Emirates and Oman. In Bahrain the first victim of Covid-19 among the Gulf countries.


Baghdad (AsiaNews) - "We are experiencing a tragic and difficult moment" due to the rapid spread of coronavirus in many countries, with "a continuous increase in victims" and serious damage to economic and social life, while "panic and anxiety" spread, writes the Chaldean primate card Louis Raphael Sako.

In a message sent to AsiaNews he also launches an appeal to the faithful: “The epidemic - he writes - should not be underestimated, one must follow prevention methods, the first of which is stay at home".

For some time the Chaldean Church has been implementing safety measures in the face of the Covid-19 epidemic, defined by Baghdad's auxiliary as "worse than a war". Hence the cancellation of masses, their broadcast on social networks, and of the main functions of the Lenten period.

Due to the lack of "rigid measures" to contain the spread of the virus "such as the closure of borders or the placing of people in quarantine", the epidemic is spreading with 154 cases, 11 victims and 32 people recovered.

The Cardinal continues, it is important to "stay home" without waiting for the government ban on circulation. "Do not leave your house - warns the cardinal - if not when necessary" and within the home walls pray "for the end of the epidemic" by lighting "a candle in front of the icon of the Virgin Mary" or "Saint Joseph on his feast on 19 March" as requested by Pope Francis.

For the victims, concludes Card Sako, "there are no funerals or public masses", the body "is brought to church with a limited number of people", the priest prays then it is taken to the cemetery. The public mass "can be celebrated at the end of the crisis", while "we of the Patriarchate will remember the name of the dead in the eight o'clock morning mass, which is broadcast live".

The coronavirus emergency does not only concern Iraq (and Iran, the epicenter of the epidemic) but is spreading throughout the Middle East.

Apostolic vicar of southern Arabia (Eau, Oman and Yemen), Msgr. Paul Hinder, accepted the invitation of the authorities and suspended prayer services and masses in the United Arab Emirates and Oman, also arranging the closure of the places of worship. The provisions entered into force on March 16 and will last for at least a month, pending verification of developments on the spread of the epidemic.

In a note Msgr. Hinder points out that the government "has taken these steps to protect people" and "I myself am the first to support them strongly" to limit the circulation of the new coronavirus.

"We must understand - added the prelate - the criticality of the situation". As I wrote earlier, "even if you cannot be physically present, all of you can participate spiritually in the Eucharist" which "I invite you to follow through electronic media".

Meanwhile, the toll and death toll continues to rise in the region: Iran, the hardest hit nation, has counted another 135 victims in the last 24 hours. According to the Ministry of Health, there are over 16 thousand confirmed cases of infection. Tehran has freed 85,000 prisoners to prevent a spread of the virus in prisons; among these also dozens of political prisoners but not high profile ones: the personalities of greatest threat to theocratic leadership remain in prison.

In Turkey, the government has identified 93 people suspected of disseminating "provocative and baseless information" online. Ankara has ordered the closure of cafes, sports clubs and entertainment centers, suspended prayer services in mosques and extended the ban on entry to 20 countries. The number of cases has risen to 98 and the first victim is registered. Returning citizens from nine European countries will have to undergo quarantine.

In Qatar there are 439 cases, zero victims and four recovered. Saudi Arabia has ordered the closure of all mosques, with the exception of the two most important in Mecca and Medina. In the Wahhabi kingdom there are 171 infections, zero victims and six people recovered. The only nation to have registered a death so far is Bahrain, with a total of 227 cases. Jordan finally announced starting today the ban on moving between provinces and invites citizens to stay home.
Full Text Source: AsiaNewsIT
Posted by Jesus Caritas Est at 10:52 AM