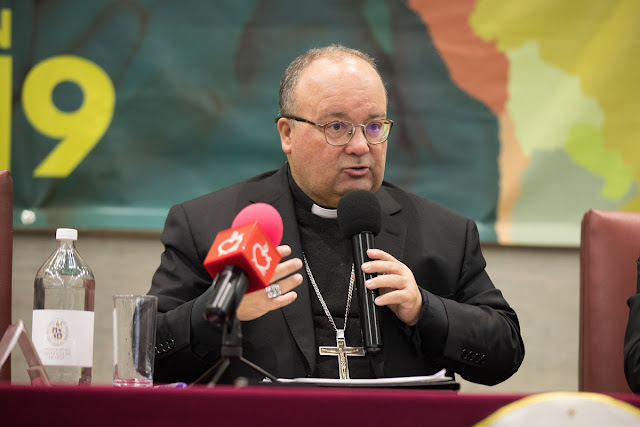 The Conference of the Mexican Episcopate (CEM) offered details about the collaborative mission between the Holy See and the Mexican Church around the protection of minors, announced on Monday.

In a press conference, (see Video at bottom) they explained that this mission will basically consist of a technical advisory service, fraternal help and dialogue that will help the Church to move forward on the path already undertaken to give due response to victims of sexual abuse of minors committed in the ecclesial scope.

In a statement read by the Secretary General of the organization, Monsignor Alfonso Miranda Guardiola, the Episcopate recalled that the mission will be integrated by Monsignor Charles Scicluna, Archbishop of Malta and Deputy Secretary of the Congregation for the Doctrine of the Faith, and by the Spanish priest Jordi Bertomeu, who will remain for a week in the Apostolic Nunciature to receive people who wish to express something on the subject.


On this mission that will take place from March 20 to 27, the apostolic nuncio Franco Coppola, who was also present at the conference, said that it was requested by the CEM to the Holy See in order to move in the right direction, "Well, there is still much to do," he said.

After considering that it is an opportunity that the Holy See offers to the people of God to continue walking in the right direction, Coppola called to trust this initiative that seeks to explore other ways: “The seriousness of the situation and the pain for the crime committed deserves that we try all the roads, ”he said.

It is worth mentioning that for a few months the Apostolic Nuncio has made his email public. In this regard, he explained that precisely in the absence of trust, at the beginning there was no response, but between December of last year and January of the present, he began receiving signaling of several situations.

For his part, the president of the organization, Monsignor Rogelio Cabrera López, detailed the walk of the Conference of the Mexican Episcopate in the fight against clerical pedophilia, and in this regard, highlighted the creation of the National Council for the Protection of Minors, an agency multidisciplinary department of the General Secretariat of the CEM, as well as its strategic plan 2019-2021.

During this time - said Cabrera López - the number of priests accused of child sexual abuse is 271; of which 103 have been resigned from the clerical state. Of the rest, 123 cases are still pending conclusion and 45 received a resolution different from the resignation.

Referring to the mission of the Holy See, the archbishop of Monterrey also insisted that it was the CEM who requested support from the Holy See in order to certify the path already undertaken; that is to say, "give certainty that things are being carried out correctly".

He said that the Pontifical Congregation for the Doctrine of the Faith has recognized that the walk of the Mexican Church in the protection of minors is on track. "We are very happy that Monsignor Charles Scicluna comes to fortify our path, but also always with the freedom he must have to take the information he needs." He recalled that the telephone of the Apostolic Nunciature is open in case anyone wishes to speak with Scicluna.

As a result of this visit, the Mexican Episcopate awaits a diagnosis that determines the actions to be performed. “We are in an attitude that is totally open for this to walk more clearly and to work incessantly so that, at least in what depends on us, it can be resolved conveniently. They will tell us if there are any serious things to solve and notify the nunciature and the Commission for the Doctrine of the Faith if someone deserves a sanction. ”