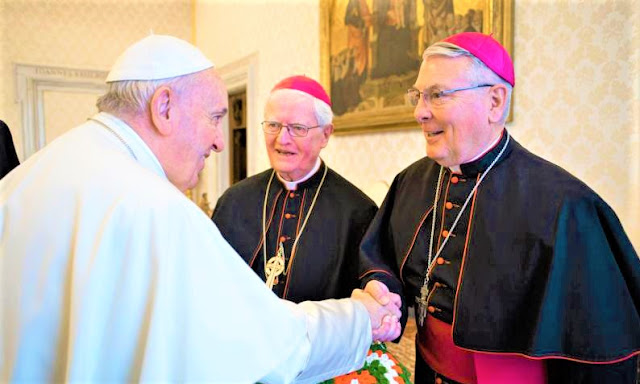 March 5, 2020
WASHINGTON—Pope Francis has named Bishop Gregory J. Hartmayer, O.F.M., Conv. of Savannah, as Archbishop of Atlanta. The appointment was publicized in Washington, D.C. on March 5, 2020 by Archbishop Christophe Pierre, apostolic nuncio to the United States.

Archbishop-designate Hartmayer was ordained to the priesthood on May 5, 1979 as a member of the Order of Friars Minor Conventual (Conventual Franciscans). He was named bishop of Savannah in 2011. His full biography may be accessed here. . . .

The Archdiocese of Atlanta has been a vacant see since April 2019. The archdiocese is comprised of 21,445 square miles in the State of Georgia and has a total population of 7,480,000 of which 1,170,000 are Catholic.
Full Text Source: USCCB
Introductory Press Conference for Archbishop Gregory Hartmayer, OFD, Conv. from Archdiocese of Atlanta on Vimeo.

Vatican News.va Biography of Archbishop-elect Gregory Hartmayer
Gregory John Hartmayer was born in Buffalo, New York, one of four children of John and Sally Hartmayer. He was raised in nearby Tonawanda, where he received his early education at St. Amelia School. He graduated from Cardinal O'Hara High School in 1969.

In 1969, Hartmayer joined the Order of Friars Minor Conventual, commonly known as the Conventual Franciscans, at the St. Joseph Cupertino Friary in Ellicott City, Maryland. He took his simple vows as a Conventual Franciscan friar on 15 August 1970, and made his solemn profession on 15 August 1973. He also studied at St. Hyacinth College and Seminary in Granby, Massachusetts, where he obtained a Bachelor of Science degree in philosophy in 1974. From 1974 to 1975, he taught at Archbishop Curley High School in Baltimore. He then returned to New York to study theology at St. Anthony-on-Hudson Seminary in Rensselaer, receiving a Master of Theology degree in 1979.

Bishop Hartmayer was ordained to the priesthood by Bishop Howard J. Hubbard on 5 May 1979, at the Cathedral of the Immaculate Conception in Albany, NY. He then returned to Archbishop Curley High School, where he served as a guidance counselor and teacher (1979-1985) and principal (1985-1988). In 1980, he earned a Master of Arts degree in pastoral counseling from Emmanuel College in Boston. He served as principal of his alma mater of Cardinal O'Hara High School in Tonawanda from 1988 to 1989, when he became principal of St. Francis High School in Athol Springs. He received a Master of Education degree in Secondary Catholic School Administration from Boston College in 1992.

Following a three-month sabbatical at St. Patrick Seminary in Menlo Park, California, Bishop Hartmayer briefly served as an instructor at John Carroll Catholic High School in Fort Pierce, Florida, in 1995. In August of that year, he was named pastor of St. Philip Benizi Church in Jonesboro, Georgia. He became pastor of St. John Vianney Church in Lithia Springs, in July 2010.

On 19 July 2011, Bishop J. Kevin Boland of the Diocese of Savannah announced his retirement and Pope Benedict XVI appointed Hartmayer as the Bishop of the Diocese. His consecration took place on 18 October 2011, at the Cathedral of St. John the Baptist in Savannah, Georgia.
Source of Biography: VaticanNews.va
Posted by Jesus Caritas Est at 10:47 AM