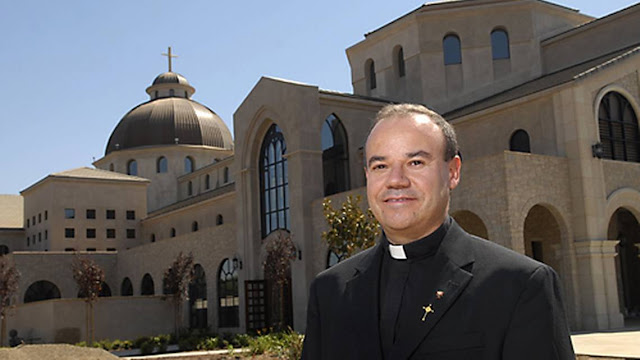 Father Bejarano is a priest of the Diocese of Stockton and currently serves as Pastor of St. Stanislaus Parish in Modesto, CA. The appointment was publicized today in Washington, D.C. by Archbishop Christophe Pierre, apostolic nuncio to the United States.

Assignments after ordination include: Parochial Vicar at St. George Church, Stockton, CA (1998-2003) and Sacred Heart Church, Turlock, CA (2004-2006), Founding Pastor of Holy Family Parish in Modesto, CA (2006-2008). From 2008 until present, he has served as Pastor of Saint Stanislaus Parish in Modesto, CA. Father Bajarano has served on the Presbyteral Council and the Board of Consultors for the Diocese of Stockton. He is fluent in both English and Spanish.

The Diocese of San Diego is comprised of 8,852 square miles in the state of California and has a total population of 3,484,311 of which 1,391,278 are Catholic. Bishop Robert W. McElroy is the current bishop of San Diego.
Source: USCCB