Pope Francis at Mass on Solemnity of St. Joseph says "Adoration happens only when one enters into God's mystery”. FULL VIDEO 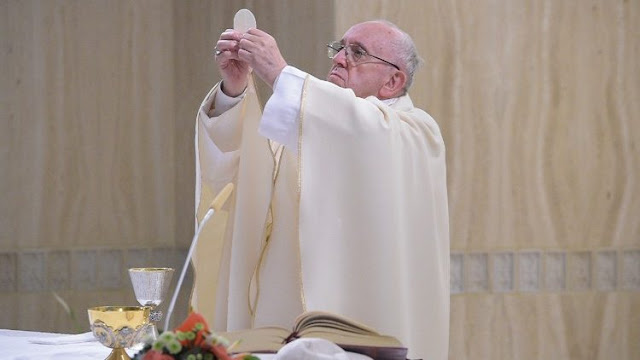 Pope at Mass: "St Joseph entered God's mystery"
Once again, Pope Francis offered his Mass at the Casa Santa Marta on Thursday morning for those in prison saying, “they suffer a lot from uncertainty and pain”.
By Vatican News

On Thursday morning, Pope Francis offered Mass at the Casa Santa Marta for prisoners. “We pray today for our brothers and sisters who are in prison”, he said. “They suffer a lot”, he continued, “because of the uncertainty of what's happening inside the prison. They are also thinking of their families and how they are doing, some of them are sick, wondering if they need anything. Let’s be near those in prison today. They are suffering a lot during this uncertain and painful moment”.

His homily focused on the saint whose Solemnity the Church celebrates today: St Joseph.

Joseph, the just man
Pope Francis began his homily characterizing Joseph as a “just man”. He was “just” not only because he believed, but because he lived “that faith”, the Pope said.

Chosen to educate God
The Pope’s words about Joseph’s vocation were truly touching:

“He was chosen to educate a man who was true man, but who was also God. Only God could have educated such a person, but there wasn't someone like that. The Lord chose a just man, a man of faith, a man who was capable of being a man, and also capable of speaking with God, of entering into God's mystery. This was Joseph life.”

Joseph and God’s mystery
The Pope reminded us how Joseph was a very precise man. In his profession as a carpenter, he was so precise that he could shave wood, or adjust an angle within a millimeter of perfection. Pope Francis said that he “entered into the mystery” with the same precision and naturalness with which he approached his carpentry.

“He was precise, but also able to enter into the mystery that he could not control. This is Joseph’s holiness.”

Even when the “Gospel talks about Joseph’s dreams” it makes us “understand that he had entered into the mystery”, Pope Francis added.

Entering the mystery
The Pope’s thoughts then turned to the Church of which St Joseph is the Patron. Are the members of the Church, including Popes, “capable of entering into the mystery?” he asked.

The Pope said that without entering into the mystery, there is only “half a Church, a pious association that operates with rules and regulations”.

The Pope’s prayer
“Let's ask the Lord for this grace”, Pope Francis prayed at the conclusion of his homily.

Posted by Jesus Caritas Est at 6:11 AM