Pope Francis explains if You can't go to Confession to Ask God's Forgiveness with all your heart with an Act of Contrition, and promise God ‘afterward I will go to confession.’ at Mass 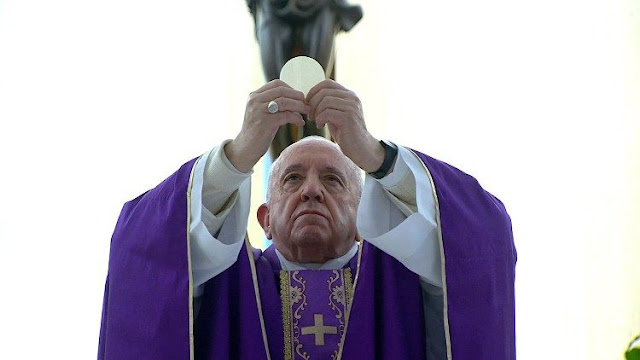 Pope at Mass: “Let’s return to our Father”
Once again the Pope prays for healthcare providers in the hard hit Bergamo region of Italy during his Mass at the Casa Santa Marta on Friday, and urges us to “return to our Father who is waiting for us”.
By Vatican News

“Yesterday, I received a message from a priest from the Bergamo region who asked for prayers for the doctors working there…. They are at the end their strength…and are truly giving their lives to help those who are ill, to save others’ lives.” He also prayed for civil leaders who are managing the crisis and often “suffer from being misunderstood”. “They are the pillars helping us move out of the situation and are defending us from this crisis”, the Pope added. “So, let’s pray for them”.

Song from his childhood
The Pope introduced his homily saying the words “return to the Lord, your God, from the first reading from Hosea (14:2), always remind him of a song sung by Carlo Buti 75 years ago.

"The Italian families in Buenos Aires used to listen to it. They liked it a lot. ‘Return to your daddy, he will still sing you a lullaby’. Return. But it’s your Father who tells you to return. God is your Daddy. He’s not a judge. He’s your Daddy. Go back home."

Father waits for His wayward son
That memory then lead him to the 15th chapter of Luke. There, another Father waits for his son who left home taking “all that money and wasting it”.

"If he sees him from a distance, it’s because He was waiting for him. How many times He went up the terrace day after day, month after months, perhaps years even. He waited for His son."
The Father’s tenderness
This is how God’s shows His tenderness. “It speaks to us especially during Lent”, the Pope said.

"[Lent] is the time to enter into ourselves and to remember the Father and return to our Daddy. ‘But, Father, I’m ashamed to go back because, you know, Father I've …done so many things wrong’. What will the Lord say? ‘Return. I will heal their defection. I will love them freely; for my wrath is turned away from them (Hosea 14:4).’ Return to your Father. The God of tenderness will heal us.”

This Father will heal us of  “so many of life’s wounds”, the Pope explained.

Confession when a priest is not available
This habit of returning home “takes flesh in the Sacrament of Reconciliation”, the Pope explained.

“I know that many of you go to confession before Easter… Many will say to me: ‘But Father…I can't leave the house and I want to make my peace with the Lord. I want Him to embrace me… How can I do that unless I find a priest?’. Do what the catechism says. It's very clear. If you don't find a priest to go to confession, speak to God. He's your Father. Tell Him the truth: ‘Lord. I did this and this and this. Pardon me.’ Ask His forgiveness with all your heart with an act of contrition, and promise Him, ‘afterward I will go to confession.’ You will return to God's grace immediately. You yourself can draw near, as the catechism teaches us, to God's forgiveness,s without having a priest at hand.”

Return
At the end of his homily, the Pope expressed the hope that the word “return” might “echo in our ears today”.