Pope Francis offers Live Video Holy Mass and says "... I would like to pray for those who are in prison” from Vatican - Full Video 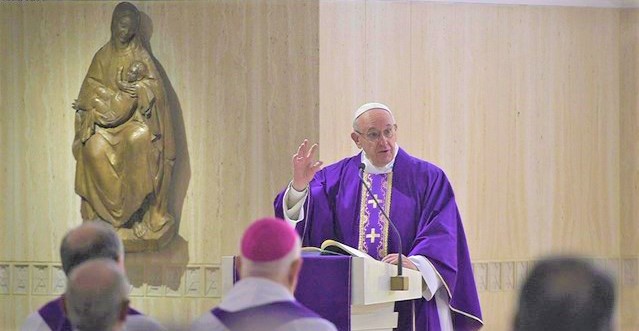 Pope Francis began the sacred liturgy on Wednesday morning remembering the imprisoned. “In a special way I would like to pray for those who are in prison” he prayed, “for our brothers and sisters…. They suffer and we must be near to them with our prayer so that the Lord might console them”. He then reflected on both readings from the liturgy of the day: Jeremiah 18:18-20 and Matthew 20:17-28.

Jeremiah a prophesy of Jesus
Pope Francis opened his homily with an explanation of how the devil tempts us to reject His plan. Like he did with Jeremiah, the devil first places obstacles in our way. Then he becomes malicious. Jeremiah’s experience is also a prophesy “of the Lord’s passion”, the Pope said.

“Let’s place obstacles… The devil doesn’t say, ‘Let’s conquer him’, or ‘Let’s kick him out’. No. ‘Let’s make his life difficult. Torment him’…. It's not only a death sentence. It's more than that. It’s humiliation….”

The devil’s first style
The devil has two styles when he persecutes Christians, the Pope continued. First, he tries to seduce them with worldliness by “making them change the plan of redemption”. This is the spirit of the world, expressed on the lips of the Mother of the sons of Zebedee. Vanity, worldliness, careerism, success: these are the ways “the devil proposes to distance us from the cross of Christ”.

The devil’s second style
When that doesn’t work, he tries to destroy the person. “The devil’s pride is so great that he tries to destroy and enjoys destroying through maliciousness”, Pope Francis said. He then reflected on the persecution of many saints and Christians. “They are not killed immediately. They are made to suffer”, he said. They suffer every form of humiliation, even death.

It is what Jesus experienced. The two thieves crucified with Jesus were not tormented like He was. They were left in peace to die. “No one insulted them. They were not interested in them”, the Pope said.

Discernment conquers the devil
Discerning how the devil is working on us is the way to overcome the obstacles the devil places on our path of discipleship. When a person is persecuted, they face the devil’s “revenge” because it means they have conquered him. This is evident today in the lives of many Christians who are “cruelly persecuted”. He then reflected on the suffering endured by Asia Bibi during her 9-year imprisonment. “This is the devil’s maliciousness”, the Pope said.

The Pope’s prayer
Pope Francis concluded his homily with a prayer for this discernment:

“May the Lord grant us the grace of knowing how to discern when the spirit that wants to destroy us is present…and when the same spirit wants to console us through the appearances of the world, with vanity.

“May the Lord grant us the grace to discern the Lord’s way, which is the cross, from the way of the world which is vanity, and appearance”.