Pope Francis Prays for those who have Died from Covid-19 at Mass saying “God humiliates Himself to walk with us, to help us”, 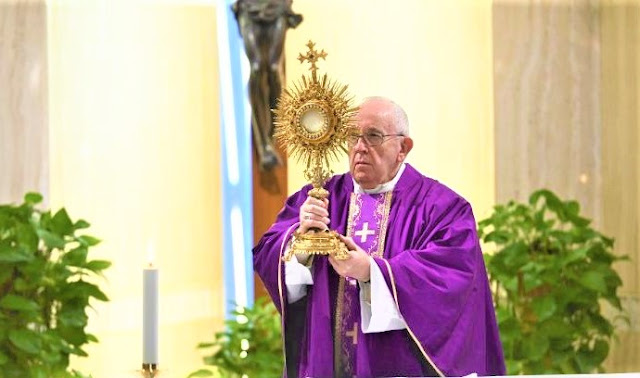 “Today we pray for the deceased, those who have died because of the virus”, Pope Francis began the liturgy on Wednesday morning in the Casa Santa Marta chapel. He then continued asking that we pray with him for “for health care providers who have given their life in service for the sick”.

During the homily, he reflected on both readings of the day which, he said, focus on the law.

The way God gives the law
Both readings focus on the law, Pope Francis began his homily: “the law that God wanted to give us” and which “Jesus wanted to bring to its ultimate perfection”. What drew the Pope’s attention was “the way God gives the law”. In fact, Moses marvels at how near God is and that no other nation “has its God so near as the Lord our God is whenever we call to Him”, Pope Francis quoted.

“The Lord gives His people the law by drawing near to them. They weren't prescriptions given by a far-off governor who then distances himself or of a dictator.  …. And we know through revelation that it was the paternal nearness of a father accompanying His people, giving them the gift of the law. A God who is near….

God draws near, we hide
Pope Francis then reflected on the tendency that humans have which is demonstrated on the first pages of the Bible. The more God draws near, the more we tend to distance ourselves from Him. The first way of distancing ourselves is to hide ourselves, the second is killing others as Cain did, he said.

“Sin leads us to hide ourselves, to not want nearness. So many times we adopt a theology thinking that He's a judge. And so I hide myself, I am afraid…. Two types of reaction that inhibit every type of nearness. Man rejects God’s nearness. He wants to be in control of relationships. And relationships always bring with them some type of vulnerability. God draws near making Himself weak. And the closer He comes, the weaker He seems to be. When He comes to live among us, He makes Himself man, one of us. He makes Himself weak. He bears that weakness even unto death, the most cruel death.”

Humility
God’s nearness demonstrates His humility. “God humiliates Himself to walk with us, to help us”, Pope Francis said. As Moses said, He is not a God somewhere up in the heavens. “He’s in the house”. Jesus shows us this. Jesus, God-made-man, “accompanies” His disciples, teaching them and “lovingly” correcting them. Jesus asks us to draw near to each other rather than to distance ourselves from each other.

God is near
The reason why we need to be near each other is because God made Himself near to accompany us. The “inheritance we have received from the Lord” is that we are neighbours, we do not live in isolation.