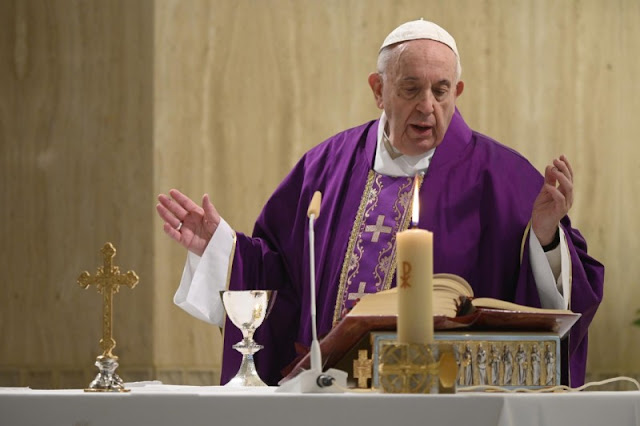 In recent days, in some parts of the world, there have been consequences - some consequences - of the pandemic; one of them is hunger. We begin to see people who are hungry, because they cannot work, did not have a permanent job, and for many circumstances. We are already beginning to see the "after", which will come later but begin now. We pray for families who are beginning to feel the need because of the pandemic.

"And each returned to his home" (Jn. 7.53): after the discussion and all this, each returned to his convictions. There is a rift in the people: the people who follow Jesus listen to him - he does not notice the long time that goes by listening to him, because the Word of Jesus enters the heart - and the group of doctors of the Law who a priori reject Jesus because they do not works according to the law, according to them. They are two groups of people. The people who love Jesus follow him and the group of intellectuals of the Law, the leaders of Israel, the leaders of the people. This is clear "when the guards returned to the chief priests and said:" Why didn't you bring him here? "Replied the guards:" Never has a man spoken like this. " But the Pharisees replied to them: “Have you too been deceived? Did any of the leaders of the Pharisees believe in him? But these people who do not know the Law are cursed "(Jn 7,45-49). This group of the doctors of the Law, the elite, feels contempt for Jesus. But also, it feels contempt for the people, "those people", who are ignorant, who know nothing. The holy faithful people of God believe in Jesus, follow him, and this group of elites, the doctors of the Law, detaches themselves from the people and does not receive Jesus. But why, if these were illustrious, intelligent, had they studied? But they had a big flaw: they had lost the memory of their belonging to a people.

The people of God follow Jesus ... he cannot explain why, but he follows him and reaches the heart, and he does not tire. Let's think about the day of the multiplication of the loaves: they spent the whole day with Jesus, to the point that the apostles said to Jesus: "Leave them, so that they go away to buy food" (cf. Mk 6:36). The apostles also took their distance, did not take into consideration, did not despise, but did not take into consideration the people of God. "Let them go to eat". Jesus' response: "Give them something to eat" (cf. Mk 6,37). He puts them back into the people.

This rift between the elite of religious leaders and the people is a drama that comes from afar. We also think in the Old Testament of the attitude of the sons of Eli in the temple: they used the people of God; and if any of them a little atheist comes to fulfill the Law, they said: "They are superstitious". The contempt of the people. The contempt of people "who are not as polite as we who have studied, who know ...". Instead, the people of God has a great grace: the nose. The sense of knowing where the Spirit is. He is a sinner, like us: he is a sinner. But he has that sense of knowing the ways of salvation.

The problem with the elites, with elite clerics like these, is that they had lost the memory of their belonging to the people of God; they are sophisticated, they have moved on to another social class, they feel they are leaders. This is clericalism, which already took place there. "But how come - I heard these days - how come these nuns, these priests who are healthy go to the poor to feed them, and can they take the coronavirus? But tell the mother superior that you don't let the nuns come out, tell the bishop that you don't let the priests come out! They are for the sacraments! But  the government is to feed others! ". This is what we are talking about these days: the same topic. "They are second-class people: we are the ruling class, we must not get our hands dirty with the poor".

Many times I think: they are good people - priests, nuns - who do not have the courage to go and serve the poor. Something is missing. What these people were missing, the doctors of the Law. They lost their memory, they lost what Jesus felt in his heart: that he was part of his own people. They have lost the memory of what God said to David: "I took you from the flock." They have lost the memory of their belonging to the flock.
And these, each, each returned to his home (cf. Jn. 7,53). A rift. Nicodemus, who saw something - he was a restless man, perhaps not so brave, too diplomatic, but restless - went to Jesus then, but was faithful to what he could; tries to mediate and takes from the Law: "Does our Law judge a man before he has listened to him and knows what he does?" (Jn 7.51). They answered him; but they did not answer the question about the Law: “Are you also from Galilee? She studies. You are ignorant, and you will see that a prophet does not arise from Galilee "(Jn 7,52). And so they ended the story.

Let us also think today of so many men and women qualified in the service of God who are good and go to serve the people; many priests who do not detach themselves from the people. The day before yesterday I received a photograph of a priest, mountain pastor, of many villages, in a place where it snows, and in the snow he took the monstrance to the small villages to give the blessing. He didn't care for the snow, he didn't care about the burning that the cold made him feel in his hands in contact with the metal of the monstrance: he only cared to bring Jesus to the people.

We think, each of us, which side we are on, if we are in the middle, a little undecided, if we are with the feeling of the people of God, of the faithful people of God that cannot fail: it has that infallibilitas in credendo. And let's think about the elite that detaches itself from the people of God, to that clericalism. And perhaps the advice that Paul gives to his disciple, the bishop, young bishop, Timothy, will do us all good: "Remember your mother and grandmother" (cf. 2 Tim. 1,5). Remember your mom and grandmother. If Paul advised this it was because he knew well the danger to which this sense of elite brought in our leadership.

People who cannot communicate because of the distance now make spiritual communion.

At your feet, O my Jesus, I bow down and offer you the repentance of my contrite heart that abysses itself into its nothingness and Your holy presence. I adore you in the Sacrament of Your love, the ineffable Eucharist. I wish to receive you in the poor home that my heart offers you. In anticipation of the happiness of sacramental communion, I want to possess you in spirit. Come to me, oh my Jesus, that I come to you. May Your love inflame my whole being for life and death. I believe in you, I hope in you. I love you. So be it.
Posted by Jesus Caritas Est at 9:25 AM