Pope Francis Recommends "... silence of the just in the face of fury." as Jesus did - in Homily at Mass - Full Video 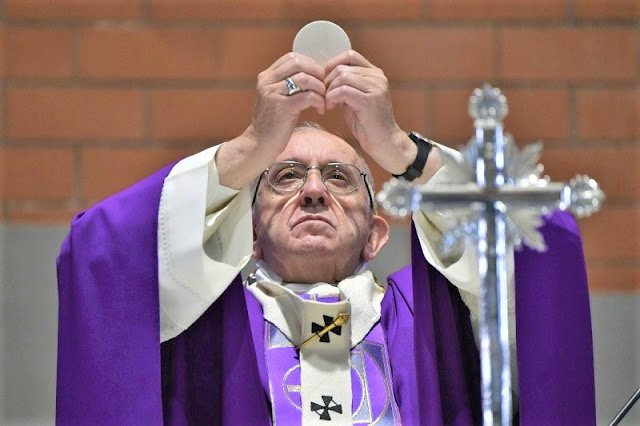 "The courage to be silent"

In these days news has come about how many people start to worry in a more general way than others, many people think of families who do not have enough to live, the elderly alone, the sick in the hospital and pray and try to get some help ... This is a good sign. We thank the Lord for arousing these sentiments in the hearts of his faithful.

The first reading is almost a chronicle before (anticipated) of what will happen to Jesus. It is a chronicle forward, it is a prophecy. It seems like a historical description of what happened next. What do the wicked say? "We tend to undermine the just who is inconvenient for us and opposes our actions. He reproaches us for the faults against the law and reproaches us for transgressions against the education received. It has become a condemnation of our thoughts for us. It is unbearable for us only to see him, because his life is not like that of others. If in fact the righteous is a child of God, he will come to his aid and free him from the hands of the adversary "(Wis. 2:12). Let's think about what they said to Jesus on the Cross: “If you are the Son of God, go down; may He come to save you "(Cf. Mt 27,40). And then, the plan of action: let's put it to the test "with violence and torment to know its mildness and test its spirit of endurance, and condemn it to an infamous death because according to his words, the help will come to him" (Cf. Sap. 2,19). It is a prophecy, precisely, of what happened. And the Jews tried to kill him, says the gospel. Then, they also tried to arrest him - the Gospel tells us - "but no one managed to get their hands on him, because his time had not yet come" (Jn. 7,30).

This prophecy is too detailed; the plan of action of these evil people is precisely details on details, do not save anything, let's test it with violence and torment, and test the spirit of endurance ... let's set them snares, let's put a trap, [to see] if it falls ... This is not it is a mere hatred, there is no bad action plan - certainly - of one party against another: this is another thing. This is called fury: when the devil who is behind, always, with every fury, tries to destroy and does not spare the means. Let's think of the beginning of the Book of Job, which is prophetic about this: God is satisfied with Job's way of life, and the devil says to him: "Yes, because he has everything, he has no proof! Test it! " (See Job 1,1-12; 2,4-6). And first the devil takes away his goods, then takes away his health and Job has never, ever turned away from God. But the devil, what he does: fury. Always. Behind every fury there is the devil, to destroy the work of God. Behind a discussion or an enmity, it may be that it is the devil but from afar, with normal temptations. But when there is fury, we do not doubt: there is the presence of the devil. And the fury is subtle subtle. Let us think of how the devil has raged not only against Jesus, but also in the persecutions of Christians; as he sought the most sophisticated means to bring them to apostasy, to move away from God. This is, as we say in everyday speech, this is diabolical: yes; diabolical intelligence.

Some bishops of one of the countries that suffered the dictatorship of an atheist regime told me in persecution about details like this: on Monday after Easter the teachers had to ask the children: "What did you eat yesterday?", And children said what was at lunch. And some said, "Eggs," and those who said "eggs" were then persecuted to see if they were Christians because they ate eggs on Easter Sunday in that country. Up to this point, to see, to espionage, where there is a Christian to kill him. This is fury in persecution and this is the devil.

And what do you do in the moment of fury? Only two things can be done: discussing with these people is not possible because they have their own ideas, fixed ideas, ideas that the devil has sown in [their] heart. We have heard what their plan of action is. What can be done? What Jesus did: keep silent. It is striking when we read in the Gospel that in front of all these accusations, Jesus kept silent about all these things. Faced with the spirit of fury, only silence, never justification. Never. Jesus spoke, he explained. When he understood that there were no words, silence. And in silence Jesus lived his Passion. It is the silence of the just in the face of fury. And this is also valid for - let's call them this - the small daily feats, when someone of us feels that there is a chatter against him, and they say things and then nothing comes out ... be quiet. Silent