Saint March 13 : St. Euphrasia a Virgin who exclaimed as a child ".. I love Jesus Christ above all." 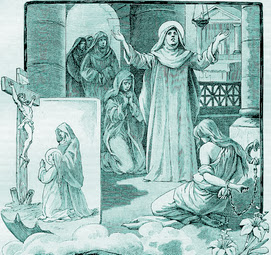 
Virgin, b. in 380; d. after 410. n the reign of Theodosius the First, Antigonus, governor of Lycia, and his wife, Euphrasia, were blessed by God with a little daughter, who was named after her mother. Antigonus and his wife feared God, and served Him with all their hearts, and with one consent resolved to bring up their little child as a bride of Christ. Shortly after Antigonus had formed this resolution he was called out of the world. When the child was five years old, the emperor, who had taken the little girl under his protection, proposed to the mother that she should be given in marriage to the son of a wealthy senator, in accordance with the custom of the times, to betroth maidens of high rank from infancy. The mother consented, and received the betrothal presents from the parents of the boy, and the marriage was arranged to take place as soon as the maiden was of a sufficient age. But in the meantime, some changes in the imperial household having thrown Euphrasia, the mother, out of favour, she retired into Egypt with her daughter, under pretext of visiting her relatives, and whilst there she travelled into Upper Egypt, and saw with admiration and respect the holy lives of the solitaries who inhabited the deserts of the Thebaid.