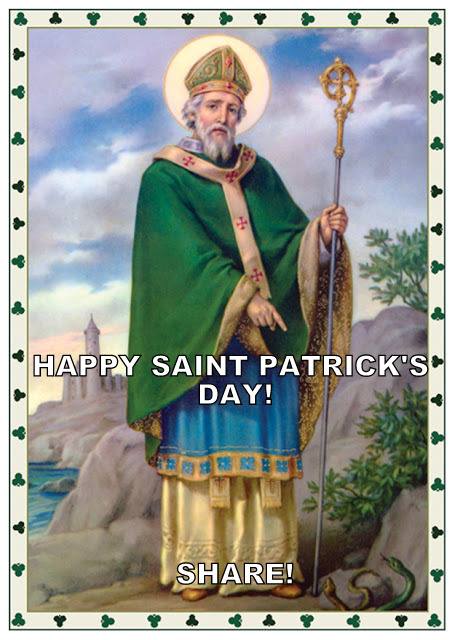 between 387 and 390
Died:
between 461 and 464 at Saul, County Down, Ireland
Patron of:
Ireland, Nigeria, Montserrat, New York, Boston, Engineers, against snakes
March 17 is one of the most widely recognized feast days throughout the Church, the feast of Saint Patrick (387-493), patron saint of Ireland.

Saint Patrick was born in Kilpatrick, Scotland, where he lived the first 14 years of his life with his family, Christians, although not overly devout. In late adolescence, Patrick was captured from his family’s home by Irish raiders, and taken back to Ireland as a slave. There, he would spend the next six years in captivity, learning Celtic customs and language, and spending significant periods of time alone, tending sheep in the fields. It was here that Patrick’s’ love of God deepened and his faith took root and bloomed. He prayed incessantly, writing, “the love of God, and His fear increased in me more and more, and the faith grew in me, and the spirit was roused, so that, in a single day, I have said as many as a hundred prayers, and in the night nearly the same, so that whilst in the woods and on the mountain, even before the dawn, I was roused to prayer and felt no hurt from it, whether there was snow or ice or rain; nor was there any slothfulness in me, such as I see now, because the spirit was then fervent within me.”
SEE ALSO:

Novena to St. Patrick https://www.catholicnewsworld.com/2018/03/novena-to-st-patrick-share-this-miracle.html
After six years of contemplation, Patrick was visited by an angel who encouraged him to return home to Scotland by escaping his slavery and walking 200 miles to the coast where he would find a ship awaiting him. Patrick did as instructed, finding the crew of s ship willing to take him to Scotland, and returned home to his grateful family. After a few years, Patrick experienced a second call from God, this time in the form of a visitor from Ireland. In his Confessions, he wrote:
I saw a man coming, as it were from Ireland. His name was Victoricus, and he carried many letters, and he gave me one of them. I read the heading: "The Voice of the Irish". As I began the letter, I imagined in that moment that I heard the voice of those very people who were near the wood of Foclut, which is beside the western sea—and they cried out, as with one voice: "We appeal to you, holy servant boy, to come and walk among us!
Patrick felt called to return to Ireland, but wished to be ordained prior to his departure. He undertook rigorous religious study, lasting approximately 14 years, during which time he was first ordained a priest, and later a bishop. Only upon becoming bishop did Patrick feel prepared to return to Ireland. While some legend suggests that Saint Patrick introduced Christianity to Ireland, it is far more likely that some small Christian communities existed before his second arrival. His dual mission was that of ministering to the existing Christian communities and converting others to the faith.
Saint Patrick had great success on both accounts, drawing from his familiarity of Celtic and Druid religious beliefs and language. He introduced natural elements into his teaching, including placing the sun on the Celtic Cross as symbolization of the Godhead, illustrating the Resurrection of Christ through the use of bonfires (symbols familiar to the Druids), and most famously, explaining the Holy Trinity through comparison to the shamrock.
Many were converted by his works, and monasteries and convents established (although their formal structure and organization would not be complete until centuries after his death). During his ministry in Ireland, Saint Patrick lived a poor and austere life, accepting only what he needed to live. He was repeatedly arrested and imprisoned, threatened and attacked by chieftains of warring tribes, and suffered great peril. Throughout all struggles, he remained fearless, looking to the Lord for guidance and comfort, and demonstrating great love, humility, and charity towards all he encountered. Numerous miracles and intercessions are reported in his name.
Saint Patrick’s ministry in Ireland spanned over 40 years, during which he laid the foundation for the seat of the Church during the Dark Ages, when Christianity survived in Irish monasteries. He died in Saul, Ireland, where he is believed to be buried. He is reported to have composed the following prayer, referred to as “Saint Patrick’s Breastplate:”
I bind to myself today The strong virtue of the Invocation of the Trinity: I believe the Trinity in the Unity The Creator of the Universe.
I bind to myself today The virtue of the Incarnation of Christ with His Baptism, The virtue of His crucifixion with His burial, The virtue of His Resurrection with His Ascension, The virtue of His coming on the Judgment Day.
I bind to myself today The virtue of the love of seraphim, In the obedience of angels, In the hope of resurrection unto reward, In prayers of Patriarchs, In predictions of Prophets, In preaching of Apostles, In faith of Confessors,
In purity of holy Virgins, In deeds of righteous men. I bind to myself today The power of Heaven, The light of the sun, The brightness of the moon, The splendor of fire, The flashing of lightning, The swiftness of wind, The depth of sea, The stability of earth, The compactness of rocks.
I bind to myself today God's Power to guide me, God's Might to uphold me, God's Wisdom to teach me, God's Eye to watch over me, God's Ear to hear me, God's Word to give me speech, God's Hand to guide me, God's Way to lie before me, God's Shield to shelter me, God's Host to secure me, Against the snares of demons, Against the seductions of vices, Against the lusts of nature, Against everyone who meditates injury to me, Whether far or near, Whether few or with many.
I invoke today all these virtues Against every hostile merciless power Which may assail my body and my soul, Against the incantations of false prophets, Against the black laws of heathenism, Against the false laws of heresy, Against the deceits of idolatry, Against the spells of women, and smiths, and druids, Against every knowledge that binds the soul of man.
Christ, protect me today Against every poison, against burning, Against drowning, against death-wound, That I may receive abundant reward.
Christ with me, Christ before me, Christ behind me, Christ within me, Christ beneath me, Christ above me, Christ at my right, Christ at my left,
Christ in the fort, Christ in the chariot seat, Christ in the deck of ships, Christ in the heart of everyone who thinks of me, Christ in the mouth of everyone who speaks to me, Christ in every eye that sees me, Christ in every ear that hears me.
I bind to myself today The strong virtue of an invocation of the Trinity: I believe the Trinity in the Unity The Creator of the Universe.
Text shared from 365 Rosaries Blog
Posted by Jesus Caritas Est at 9:30 PM