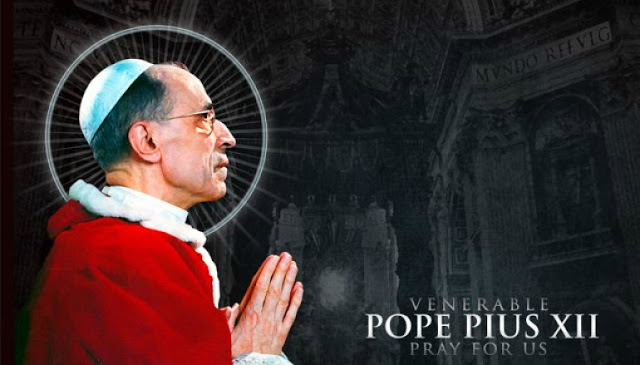 Vatican News reports that the Holy See has opened archives on Pope Pius XII.
The Holy See opens its archives on the pontificate of Pius XII, offering researchers the opportunity to shed light on a dark period in world history.
By Benedict Mayaki

From Monday, 2 March 2020, the Vatican Apostolic Archives, alongside several other archives of the Holy See on the pontificate of Pius XII (1939 – 1958), have been opened to consultation by scholars.


First announced by Pope Francis on 4 March 2019, the opening is the result of more than fourteen years of preparation by the Historical Archives relating to the Vatican's Section for Relations with States.

The vast quantity of material available for consultation includes about 120 Series and Archives from the Secretariat of State, Roman Congregations, and Curia offices, which make up about 20,000 archival units.

A large portion of these resources is available in digital form according to a statement released on Monday by the Vatican Apostolic Archives.


Limited reservation space
The various archives of the Holy See can host about 120 researchers at a time.

The Vatican archives, which will exhibit documents from the pontificate of Pius XII, is only accessible by reservation. Bookings began in October and those made so far have been distributed over the period of several months (until May – June) to ensure equal access to materials to scholars of Pope Pius XII’s pontificate.

Pope Pius XII’s pontificate spanned nearly 20 years and covered important events in the life of the Church and society during the Second World War.

The period also saw opposition between the Eastern and Western political blocs, and the successive opening up of the Church to a less Eurocentric and more universal spirit.

Opening up the archives
Only a Pope can grant access to the documents of his predecessors.

In more recent times, Pope Benedict XVI made the documents of the pontificate of Pius XI accessible.

The goal of opening up the archives on Pius XII is to give scholars the possibility of accessing sources that were unavailable up until now.
In a separate report Vatican News notes
In terms of size, Archbishop Gallagher says the archive is pretty big:
“About 2 million documents! And if you put it all together – and it is together – it measures 323 linear meters of documents in boxes, cases, etc.” He says the documents cover a vast area of activity: the actions of the Holy See during WW2, its diplomacy, Concordats negotiated, the humanitarian work of the Church, reports on particular religious and political issues, educational reports, and documents concerning Vatican City State.
Gallagher notes the material also highlights the work of some of those who emerged as protagonists during that era, including Monsignor Montini, the future Pope Paul VI. “1939 to 1948 is completely ready and will be made available on 2 March,” he says, whilst for the years that go from ’48 to ’58, the work is well advanced but is not yet complete and therefore is not yet available. The Church and the Pope during WWII and the Cold War Of course, many of the documents contained in the archives relate to the activities of the Pope and of the Holy See during the years of the Second World War.
The Archbishop says Pope Pius XII “emerges as a great champion of humanity, a man deeply concerned about the fate of humankind during those terrible years, somebody who was very sensitive and concerned about those who were being persecuted, somebody who was also the object of the hatred of Nazis and fascism.”
They also make quite clear how those attacks were directed not just at the Pope but at the Church in general, he says.
Another particularly interesting section of the archives shines a new light on the initial period of the ‘Cold War’.
Gallagher reveals that they document the role of Pope Pacelli and that of Cardinal Casaroli in those years after the war, and of the work of religious and priests “who were trying to make contact with local Soviet authorities in order to try and work out some difficult but necessary modus vivendi for the Church to create a space.
This, he says, is exactly what Casaroli went on to do later in Eastern Europe “to try and create a degree of understanding and a space in which the Church could operate.”
Digitalization
Archbishop Gallagher concludes explaining the advantages of having digitalized the Archives:
“One advantage is the possibility to preserve, to conserve the documents because through digitalization people are granted access but you don’t have to take the documents out of the place where they are being stored, they don’t have to be touched and exposed to the atmosphere,” he notes.
The second principle advantage, he says, is the facility with which they can be accessed because they include inventories and catalogues that make consultation easy. Finally, he notes, “It also means that people can work on the same document at the same time, which is a great advantage for historians and students alike! Source: VaticanNews.va- Image Source Youtube screenshot - Google Images
Posted by Jesus Caritas Est at 1:25 PM