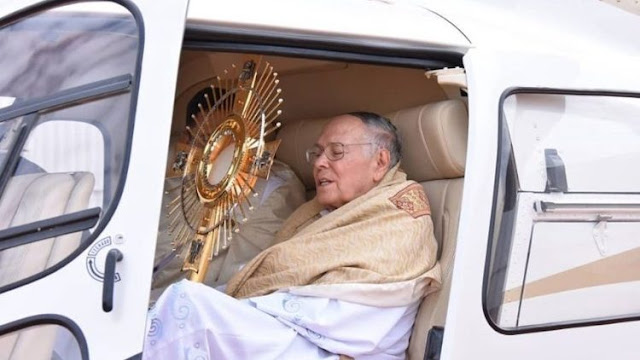 AMERICA/BRAZIL - In a plane with the ostensory or with the statue of the Virgin Mary to bless the Brazilians during the pandemic
Tuesday, 31 March 2020

Goiania (Agenzia Fides) – In order to invoke the health and protection of the people of God, after the blessing imparted by Pope Francis Urbi et Orbi on Friday, March 27, from St. Peter's Square, some dioceses in Brazil promoted particular initiatives to bless the faithful, invite to prayer and show closeness even in this period of isolation due to covid 19.
In Goiânia, Archbishop Washington Cruz flew over the capital and metropolitan region with the Blessed Sacrament: "Jesus Christ, resurrection and life, make us strong in faith and grant us the gift of healing, the gift of overcoming this pandemic", he said in a video released by the CNBB. The Archbishop commented his experience with these words: "It was an experience of my smallness, of my nothingness. It was Jesus the Sacrament who flew over Goiânia. I was just an instrument that carried it.
It was He who certainly blessed Goiânia, the surroundings, the archdiocese, Brazil and the whole world".
In Belém the pilgrim image of Nossa Senhora de Nazaré, patroness of the state of Pará and considered Queen of the Amazon, was transported by helicopter, by the rector of the Marian Basilica, Father Luiz Carlos Maria Gonçalves, and by some faithful who prayed with the Rosary "pleading for the blessings and protection of the Virgin of Nazaré", according to a video shared on social networks. The Archbishop of Belém, Alberto Taveira Corrêa, said it was a very positive experience, "which helped many people to feel the protection of Our Lady in this very difficult period". "I hope many other initiatives - he added - will help us fight with the most powerful weapons we have: prayer, penance, fasting, charity, which are the weapons of Lent and which can help us overcome this challenge".
Yesterday, March 30, the archdiocese of São Luís was flown over by the image of Nossa Senhora da Vitória, patron saint of the city and to whom the metropolitan cathedral is dedicated, invoking her intercession so that "God frees us from the evil that afflicts Brazil and the world". Parish priest of the cathedral, Father Roney Rocha Carvalho on board, and during the trip, all the faithful were invited to pray the rosary, "thus forming a large prayer chain in the city". (SL) (Agenzia Fides, 31/3/2020)