At Mass, Pope Francis Prays for those Working with the Disabled and says ".. the true Christian: is courageous, and tells the whole truth..." 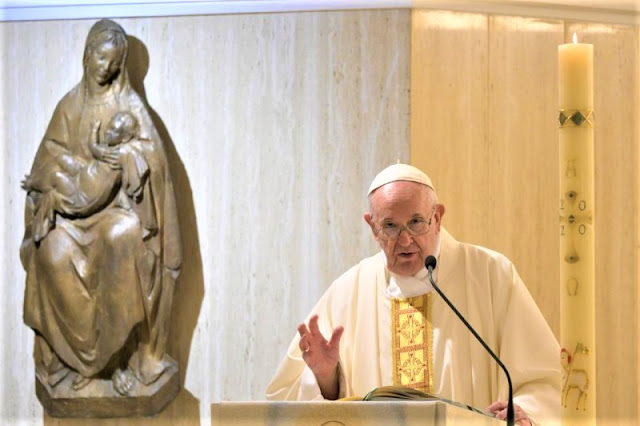 "The gift of the Holy Spirit: frankness, courage, parrhesia"

Yesterday I received a letter from a nun, who works as a sign language translator for deaf and dumb people, and told me about the difficult work that health workers, nurses, doctors have, with disabled patients who have Covid- 19. We pray for them that they are always at the service of these people with different skills, but they don't have the skills we have.

The leaders, the elders, the scribes, seeing these men and the frankness with which they spoke, and knowing that they were people without education, perhaps they could not write, were amazed. They did not understand: "But it is something we cannot understand, how courageous these people are, this frankness" (cf. Acts 4:13). This word is a very important word which becomes the style proper to Christian preachers, also in the Book of Acts of the Apostles: frankness. Courage. It means all that. Say it clearly. It comes from the Greek root of saying everything, and we too use this word many times, just the Greek word, to indicate this: parrhesia, frankness, courage. And they saw this frankness, this courage, this parrhesia in them and they didn't understand.

Openness. The courage and frankness with which the first apostles preached ... For example, the Book of Acts is full of this: it says that Paul and Barnabas tried to explain to the Jews frankly the mystery of Jesus and preached the Gospel with frankness (cf. 13,46).

But there is a verse that I like so much in the Letter to the Hebrews, when the author of the Letter to the Hebrews realizes that there is something in the community that is going down, that you are missing that thing, that there is a certain warmth, that these Christians are becoming lukewarm. And he says this - I don't remember the quote well ... - he says this: "Called back to the first days, you have endured a great and hard struggle: don't throw away your frankness now" (cf Heb 10: 32-35). "Take back", take back the frankness, the Christian courage to move forward. One cannot be a Christian without this frankness coming: if he does not come, you are not a good Christian. If you don't have the courage, if to explain your position you slip on ideologies or case explanations, you lack that frankness, you lack that Christian style, the freedom to speak, to say everything. The bravery.

And then, we see that the leaders, the elderly and the scribes are victims, they are victims of this frankness, because it puts them on the corner: they don't know what to do. Realizing "that they were simple and uneducated people, they were amazed and recognized them as those who had been with Jesus. Then seeing the man who had been healed standing next to them, they did not know what to reply" (Acts 4:13). -14). Instead of accepting the truth as we saw, their hearts were so closed that they sought the path of diplomacy, the path of compromise: "Let's frighten them a bit, tell them that they will be punished and see if they keep silent" (cf. Acts 4:16 -17). Really, they are cornered just by frankness: they didn't know how to get out of it. But it didn't occur to them to say, "But isn't this true?" The heart was already closed, it was hard: the heart was corrupt. This is one of the tragedies: the power of the Holy Spirit that is manifested in this frankness of preaching, in this madness of preaching, cannot enter into corrupt hearts. For this, we are careful: yes sinners, never corrupt. And don't get to this corruption that has so many ways to manifest itself ...

But, they were on the corner and didn't know what to say. And in the end, they found a compromise: "Threaten them a little, frighten them a little", and invite them, they called them back and ordered them, they invite them not to speak at any time or to teach in the name of Jesus. peace: you go in peace, but do not speak in the name of Jesus, do not teach "(cf. Acts 4:18). We knew Peter: he was not a brave born. He was a coward, he denied Jesus. But what has happened now? They reply: “If it is right before God to obey you instead of God, judge him; we cannot keep silent what we have seen and heard "(Acts 4,19-20). But where does this courage come from, to this coward who denied the Lord? What happened to this man's heart? The gift of the Holy Spirit: frankness, courage, parrhesia is a gift, a grace that the Holy Spirit gives on the day of Pentecost. Just after receiving the Holy Spirit, they went to preach: a little brave, something new for them. This is coherence, the signal of the Christian, of the true Christian: is courageous, and tells the whole truth because it is coherent.
And to this coherence call the Lord in sending. After this synthesis made by Mark in the Gospel: «Risen in the morning ...» (16,9) - a synthesis of the resurrection -, «he reproached them for their unbelief and hardness of heart, because they had not believed those who had him risen visa "(v. 14). But with the power of the Holy Spirit - it is Jesus' greeting: "Receive the Holy Spirit" (Jn 20:22) - and he said to them: "Go into all the world and proclaim the Gospel to every creature" (Mk 16:15) ). Go boldly, go frankly, don't be afraid. Do not - I repeat the verse of the Letter to the Hebrews - "do not throw away your frankness, do not throw away this gift of the Holy Spirit" (cf. Heb 10.35). The mission is born from here, from this gift that makes us brave, frank in the announcement of the word.

May the Lord always help us to be like this: courageous. This does not mean imprudent: no, no. Courageous. Christian courage is always prudent, but it is courage.

At Your feet, O my Jesus, I bow down and offer You the repentance of my contrite heart that abysses itself in its nothingness and in Your holy presence. I adore you in the Sacrament of Your love, the Eucharist. I wish to receive you in the poor home that my heart offers you. In anticipation of the happiness of sacramental communion, I want to possess you in spirit. Come to me, oh my Jesus, that I come to you. May Your love inflame my whole being for life and death. I believe in you, I hope in you, I love you.

At the end of the Mass

Tomorrow the Holy Mass will be celebrated in the parish of Santo Spirito in Sassia, at 11. And Monday we will resume here, at 7. The Mass is over, let's go in peace: Alleluja, alleluja.
Full Text Source: Vatican.va Unofficial Translation -