At Mass, Pope Francis says "... each of us must choose: either serve God, and you will be free in adoration and service; or serve money..." Homily 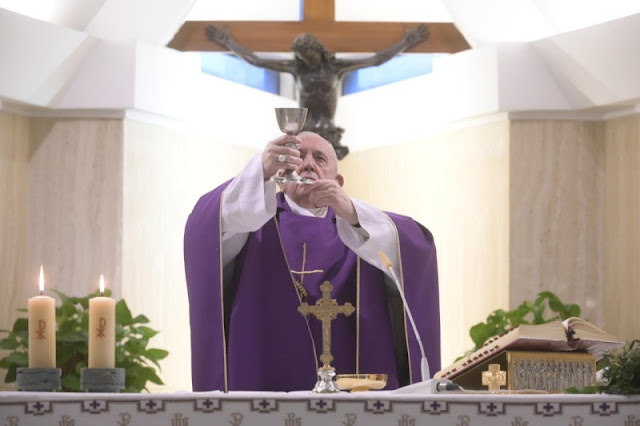 Let us pray today for people who in this pandemic time trade with the needy; they take advantage of the needs of others and sell them: the mafiosi, the usurers and many. May the Lord touch their hearts and convert them.

Holy Wednesday is also called "Wednesday of the betrayal", the day on which the betrayal of Judas is emphasized in the Church. Judas sells the Master.

When we think of selling people, the trade made with slaves from Africa comes to mind to bring them to America - an old thing - then the trade, for example, of the Yazidi girls sold in Daesh: but it is far away, it is one thing ... Even today people are selling. Everyday. There are Judas who sell brothers and sisters: exploiting them in their work, not paying the right, not recognizing the duties ... Indeed, they often sell the most expensive things. I think that in order to be more comfortable, a man is able to remove his parents and never see them again; keep them safe in a retirement home and not go find them ... it sells. There is a very common saying that, speaking of people like this, it says that "this is capable of selling its mother": and they sell it. Now they are calm, they are removed: "Take care of them ...".
Today human trade is like in the early days: it is done. And why this? Why: Jesus said it. He gave money a lady. Jesus said: "God and money cannot be served" (cf. Lk. 16:13), two gentlemen. It is the only thing that Jesus places up to and each of us must choose: either serve God, and you will be free in adoration and service; or serve money, and you will be a slave to money. This is the option; and so many people want to serve God and money. And this cannot be done. Eventually they pretend to serve God to serve money. They are the hidden exploiters who are socially flawless, but under the table they do business, even with people: it doesn't matter. Human exploitation is selling one's neighbor.

Judas is gone, but has left disciples, who are not his disciples but the devil. What Judah's life was like, we don't know. A normal boy, perhaps, and also with anxieties, because the Lord called him to be a disciple. He never managed to be: he had no disciple's mouth and disciple's heart as we read in the first Reading. He was weak in discipleship, but Jesus loved him ... Then the Gospel makes us understand that he liked money: at Lazarus 'house, when Mary anointed Jesus' feet with that so expensive perfume, he makes the reflection and John underlines: "But he does not say it because he loved the poor: because he was a thief "(cf. Jn 12,6). The love of money had brought him out of the rules: to steal, and to steal to betray there is a step, little one. Those who love money too much cheat to have more, always: it's a rule, it's a fact. The boy Judas, perhaps good, with good intentions, ends up traitor to the point of going to the market to sell: "He went to the chief priests and said:" How much do you want to give me so that I will deliver it to you directly? "" (Cf. Mt. 26,14). In my opinion, this man was out of his mind.

One thing that attracts my attention is that Jesus never says "traitor" to him; he says he will be betrayed, but does not say "traitor" to him. Mai says: "Go away, traitor." Never! In fact, she says to him, "Friend", and kisses him. The mystery of Judah: how is the mystery of Judah? I don't know ... Don Primo Mazzolari explained it better than I ... Yes, it comforts me to contemplate that capital of Vezelay: how did Judas end? I do not know. Jesus threatens strongly here; strong threat: "Woe to that man from whom the Son of Man is betrayed: better for that man if he had never been born!" (Cf. Mt. 26,24). But does this mean that Judas is in Hell? I do not know. I look at the capital. And I hear the word of Jesus: "Friend".

But this makes us think of another thing, which is more real, more than today: the devil entered Judah, it was the devil who led him to this point. And how did the story end? The devil is a poor payer: he is not a reliable payer. It promises you everything, shows you everything and in the end leaves you alone in your desperation to hang yourself.

The heart of Judas, troubled, tormented by greed and tormented by love for Jesus - a love that has failed to make love - tormented with this fog, returns to the priests asking for forgiveness, asking for salvation. "What have we got to do with it? It is yours ... "(cf. Mt. 27.4): the devil speaks like this and leaves us in despair.

We think of many institutionalized Judas in this world who exploit people. And we also think of the little Judas that each of us has within us in the hour of choosing: between loyalty or interest. Each of us has the ability to betray, to sell, to choose for one's own interest. Each of us has the opportunity to let ourselves be attracted by the love of money or goods or future well-being. "Judas, where are you?" But the question I ask each of us: "You, Judas, the little Judas that I have inside: where are you?".

At Your feet, O my Jesus, I bow down and offer You the repentance of my heart that abysses itself into its nothingness and Your holy presence. I adore you in the Sacrament of Your love, the ineffable Eucharist. I wish to receive You in the poor abode that my heart offers You. In anticipation of the happiness of sacramental communion, I want to possess you in spirit. Come to me, Jesus, that I come to you. May Your love inflame my whole being for life and death. I believe in you, I hope in you, I love you.

Nancy Dewey said…
Such a powerful question to ponder, consider. May God remove the scales from my own eyes to answer this question without justification, rationalization or denial.
April 8, 2020 at 10:49 AM

mary jane miller said…
well said Nancy, beautiful words and softness, let us all learn kindness as we are still. peace on the planet
April 8, 2020 at 1:26 PM