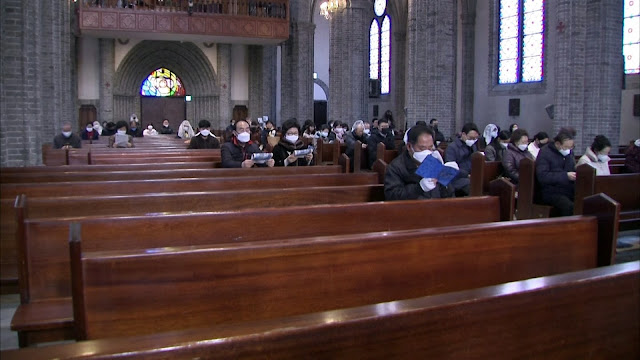 Asia News reports that Churches have reopened in South Korea.
For a third straight day infections remain under 20 new cases: yesterday there were 8. Some public places can reopen as long as they comply with health guidelines. The popular baseball championship also starts again. The country is a winning model of fighting the virus.


Seoul - (AsiaNews / Agencies) - Coronavirus cases continue to decline in South Korea. Today, 13 have been counted, including 7 imported from abroad. It is the third day in a row that the number remains below 20; yesterday there were only 8. The peak of the infection had been reached on February 29 with 909 infected.

The government extended social separation measures in late May, but has eased some aspects. Public places like churches, gyms and bars can reopen. School tests and job interviews are also possible. All of this is tied to compliance with health guidelines. The local baseball league, a very popular sport with South Koreans, can also kick off, albeit without spectators.

The country is seen as a virtuous model in the fight against the pandemic: a democratic alternative - together with Taiwan - to China's draconian response. Experts say that one of the primary factors that contributed most to this success, was the rapid reaction to the first signs of the crisis; the widespread diagnostic tests; strict quarantine measures; the involvement and collaboration of the population.
Edited from Asia News IT - Image Source : Google Images Youtube Screenshot
Posted by Jesus Caritas Est at 10:29 AM