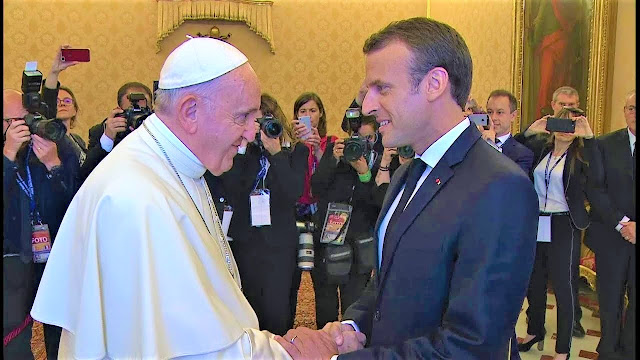 Pope and French President discuss response to pandemic
Pope Francis and the French President engage in a telephone conversation focussed on the EU’s response to the coronavirus pandemic and the need for debt reduction in poor countries.
This was revealed in a report by Vatican News by Linda Bordoni


The President’s office said the Pope and President Emmanuel Macron spoke for about 45 minutes on Tuesday afternoon by telephone.

It also said the Pope positively acknowledged “the constructive responses taken by France at the international level after the health crisis caused by the pandemic.”

Global ceasefire and debt relief
This reflects the appeal made by Pope Francis during his Easter Sunday Urbi et Orbi message in which he said: "May Christ our peace enlighten all who have responsibility in conflicts, that they may have the courage to support the appeal for an immediate global ceasefire in all corners of the world."


French President announces possibility of debt cancellation for African countries
In that message, Pope Francis also reminded the world that this is not the time for indifference, self-centeredness or division and said: “May all nations be put in a position to meet the greatest needs of the moment through the reduction, if not the forgiveness, of the debt burdening the balance sheets of the poorest nations.”

This appeal was immediately echoed by President Macron who announced the possibility of cancelling the debt of African countries to assist them in their fight against the Covid-19 virus and its far-reaching consequences. And, in line with the Pope, Macron has also called for unity in the fight against the virus.
With over 20,000 deaths, France has been the third country most affected by the coronavirus in Europe, after Italy and Spain.
The President’s Office said the two leaders stressed their convergence of views on these issues and revealed that Macron wanted to explain how France was committed to going forward. At the beginning of the telephone conversation, Emmanuel Macron reportedly also renewed his invitation to the Pope to visit France.
EU member states to hold crucial meeting on pandemic response
The exchange of views between the Pope and the French President comes on the eve of a meeting of the heads of the 27 member states of the European Union, scheduled to be held by video conference on April 23.

That meeting is expected to result in crucial decisions regarding the financial instruments the union will adopt to assist states’ response to the Covid-19 pandemic, especially those nations worst hit by the virus - Italy, Spain and France.

Macron in dialogue with faith leaders