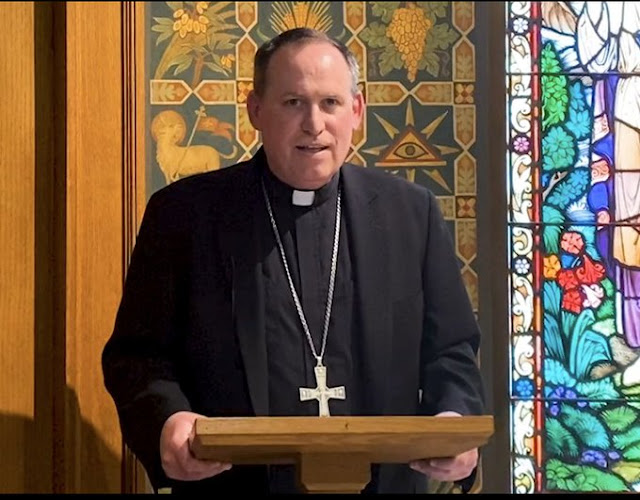 The appointment was publicized in Washington, D.C. on April 15, 2020 by Archbishop Christophe Pierre, apostolic nuncio to the United States.
Bishop-elect Sweeney was born on January 17, 1970 in Elmhurst, New York and was ordained to the priesthood on June 28, 1997 for the Diocese of Brooklyn. Father Sweeney graduated from St. John’s University, Queens, New York in 1992 with a Bachelor of Arts and received a Master of Divinity from Immaculate Conception Seminary in Huntington, New York in 1997.
Father Sweeney's assignments in the Diocese of Brooklyn after ordination include: Parochial Vicar at St. Nicholas of Tolentine Parish in Jamaica (1997-2003); Coordinator of the Irish Apostolate (1999-2001); Parochial Vicar at Our Lady of Sorrows, Corona (2003-2004); Director of Vocations for the Diocese of Brooklyn (2004-2010); Chaplain at Bishop Loughlin Memorial High School, Brooklyn (2005); Administrator at St. Michael Parish, Brooklyn (2010-2012); Spiritual Director at Jovenes de Valor (2010-2013). His service includes membership on the Seminary Admissions Board (2010-present); Presbyteral Council (2011-2016); Dean of the Brooklyn 8 Deanery (2013-present); Vocations Representative (2014-present); and the Priest Personnel Assignment Board (2017-present). Bishop-elect Sweeney, who speaks both English and Spanish, is currently Pastor of St. Michael Church in Brooklyn where he has served since March 2012.
The Diocese of Paterson is comprised of 1,214 square miles in the State of New Jersey and has a total population of 1,153,982 of which 430,000 are Catholic.

April 3, 2020
WASHINGTON—Pope Francis has accepted the resignation of Bishop Edward K. Braxton, 75, from the pastoral governance of the Diocese of Belleville and has named Father Michael G. McGovern, a priest of the Archdiocese of Chicago as Bishop-elect of Belleville.
The appointment was publicized in Washington, D.C. on April 3, 2020 by Archbishop Christophe Pierre, apostolic nuncio to the United States.
Bishop-elect McGovern was born on August 1, 1964 and ordained to the priesthood on May 21, 1994 for the Archdiocese of Chicago.
Father McGovern graduated from Loyola University, Chicago, in 1990, and holds a Baccalaureate in Sacred Theology from the University of St. Mary of the Lake Seminary, Mundelein, Illinois. His assignments in the Archdiocese of Chicago after ordination include: Associate Pastor of Queen of the University Parish (1995-1998) and St. Mary Parish (1998-1999); Associate Chancellor (1998-1999); Vice Chancellor (1999-2000); and Archbishop’s Delegate for Extern and International Priests (2000-2002). Father McGovern has also served as Associate Pastor of St. Juliana Parish (2003-2004), Pastor of St. Mary Parish (2004-2016) and as Dean of one of the deaneries of the archdiocese since 2007. He is currently Pastor of St. Raphael the Archangel Parish where he has served since 2016.
The Diocese of Belleville is comprised of 11,678 square miles in the State of Illinois and has a total population of 841,814 of which 90,968 are Catholic.
---
FULL TEXT Releases: USCCB http://usccb.org/news/2020/20-61.cfm
Posted by Jesus Caritas Est at 3:49 PM