Pope Francis says "I urge everyone to be witnesses of the risen Christ who shows his disciples the now glorious wounds..." Full Text + Video 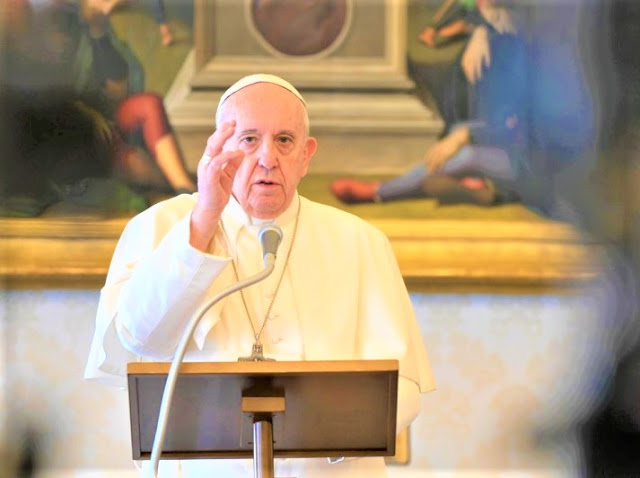 Catechesis on the Beatitudes: 9. " Blessed are the persecuted for justice, because of them is the kingdom of heaven " ( Mt 5:10)
Dear brothers and sisters, good morning!
With today's audience we conclude the journey on the Gospel Beatitudes. As we have heard, in the latter the eschatological joy of the persecuted for justice is proclaimed.
This bliss announces the same happiness as the first: the kingdom of heaven is of the persecuted as it is of the poor in spirit; so we understand that we have reached the end of a unitary path unraveled in the previous announcements.
Poverty in spirit, tears, meekness, a thirst for holiness, mercy, purification of the heart and works of peace can lead to persecution because of Christ, but this persecution is ultimately a cause for joy and great reward. in the skies. The path of the Beatitudes is an Easter journey that leads from a life according to the world to that according to God, from an existence guided by the flesh - that is, by selfishness - to that guided by the Spirit.
The world, with its idols, its compromises and its priorities, cannot approve of this type of existence. The "structures of sin", [1] often produced by the human mentality, as foreign as they are to the Spirit of truth that the world cannot receive (cf. Jn 14:17), can only reject poverty or meekness or purity and declare life according to the Gospel as an error and a problem, therefore as something to be marginalized. So thinks the world: "These are idealists or fanatics ...". So they think.
If the world lives on the basis of money, anyone who demonstrates that life can be fulfilled in the gift and renunciation becomes a nuisance for the system of greed. This word "annoyance" is key, because the only Christian testimony, which does so much good to many people because it follows it, annoys those with a worldly mentality. They live it as a rebuke. When holiness appears and the life of the children of God emerges, in that beauty there is something uncomfortable that calls for a stand: either to let oneself be questioned and open to the good or to refuse that light and harden the heart, even to the point opposition and fury (see Sap2,14-15). It is curious, it attracts attention to see how, in the persecutions of the martyrs, hostility increases to the point of fury. Just look at the persecutions of the last century, of the European dictatorships: how we get to the fury against Christians, against the Christian testimony and against the heroism of Christians.
But this shows that the drama of persecution is also the place of liberation from subjection to the world's success, vainglory and compromises. What is it that rejoices those who are rejected by the world because of Christ? He rejoices that he has found something worth more than the whole world. In fact, "what advantage is there that a man gains the whole world and loses his life?" ( Mk 8,36). What advantage is there?
It is painful to remember that, at this moment, there are many Christians who suffer persecutions in various areas of the world, and we must hope and pray that their tribulation will be stopped as soon as possible. There are many: today's martyrs are more than the martyrs of the first centuries. We express our closeness to these brothers and sisters: we are one body, and these Christians are the bleeding members of the body of Christ which is the Church.
But we must also be careful not to read this bliss in a victimistic, self-pitying key. In fact, contempt for men is not always synonymous with persecution: just shortly after Jesus says that Christians are the " salt of the earth ", and warns against the danger of "losing flavor", otherwise salt "for nothing else" it is necessary that to be thrown away and trampled by people "( Mt 5:13). Therefore, there is also a contempt that is our fault when we lose the flavor of Christ and the Gospel.
We must be faithful to the humble path of the Beatitudes, because it is what leads to being of Christ and not of the world. It is worth remembering the journey of Saint Paul: when he thought he was a righteous he was in fact a persecutor, but when he discovered that he was a persecutor, he became a man of love, who happily faced the suffering of the persecution he suffered (cf Col 1.24).
Exclusion and persecution, if God grants us grace, make us resemble Christ crucified and, associating us with his passion, are the manifestation of new life. This life is the same as that of Christ, who for us men and for our salvation was "despised and rejected by men" (cf. Is 53: 3; Ac8.30 to 35). Welcoming his Spirit can lead us to have so much love in our hearts that we offer life for the world without compromising on its deceptions and accepting its refusal. Compromises with the world are the danger: the Christian is always tempted to make compromises with the world, with the spirit of the world. This - rejecting compromises and going down the path of Jesus Christ - is the life of the Kingdom of heaven, the greatest joy, true joy. And then, in persecutions there is always the presence of Jesus who accompanies us, the presence of Jesus who consoles us and the strength of the Spirit who helps us to move forward. Let us not be discouraged when a life consistent with the Gospel attracts people's persecutions: there is the Spirit who supports us, on this path.
[1] See Address to participants in the workshop "New forms of solidarity fraternity, inclusion, integration and innovation" , 5 February 2020: "The idolatry of money, greed, corruption, are all" structures of sin "- as John Paul II defined them - produced by the "globalization of indifference" ".

Regards:
Je suis heureux de saluer les personnes de langue française. In célébrant saint Joseph travailleur, le 1 er mai prochain, je confie à la miséricorde de Dieu toutes les personnes frappées par le chômage dû à la pandémie actuelle. Those Seigneur soit la Providence de tous ceux qui sont dans le besoin et nous incite à leur venir en aide! Que Dieu vous bénisse!
[ I am happy to greet the French-speaking faithful. Next Friday will be the feast of Saint Joseph the worker: through his intercession, I entrust to the mercy of God those affected by unemployment because of the current pandemic. May the Lord be the Providence of all the needy and encourage us to help them! God bless you! ]
I greet the English-speaking faithful joining us through the media. In the joy of the Risen Christ, I invoke upon you and your families the loving mercy of God our Father. May the Lord bless you!
[ I greet the English-speaking faithful connected through the social media. In the joy of the Risen Christ, I invoke upon you and your families the merciful love of God our Father. The Lord bless you! ]
Herzlich grüße ich die Gläubigen deutscher Sprache. Die göttliche Macht des auferstandenen Christus, dessen Glieder wir sind, möge in uns immerdar die Freude des Evangeliums und die Kraft, es wahrhaftig zu bezeugen, lebendig halten. Der Herr begleite euch mit seinem Frieden.
[ I warmly greet the German-speaking faithful. May the power of the Risen Christ, of which we are members, keep the joy of the Gospel alive and the strength to be true witnesses of it. The Lord accompany you with his peace .]
I cordially greet you to the words of the language that you sign to the través de los medios de comunicación social. The soul to follow the senda de las bienaventuranzas, haciéndolas vida con quienes tienen cerca y sufren, de modo particular en estos momentos de adversidad y dificultad. The Señor will concede experimentar, in the medium of the circunstancias that the toca vivir, a great alegría y paz interior. Que Dios los bendiga.
Saúdo os ouvintes de língua portuguesa e confio ao bom Deus a vossa vida e dos dos vossos familiares. Rezai também vós por mim! Que as vossas famílias se reúnam diariamente para a reza do terço sob o olhar da Virgem Mãe, para que nelas não se acabe jamais o óleo da fé e da alegria, que brota da vida dos seus membros em comunhão com Deus! Obrigado!
[ I greet the Portuguese-speaking listeners. I entrust your life and that of your family members to the good God. You too pray for me! I urge your families to gather daily for the recitation of the Rosary under the gaze of the Virgin Mother, so that the oil of faith and joy, which flows from the life of those in communion with God, will not be exhausted in them .]
أحيي جميع المؤمنين الناطقين باللغة العربية ، المتابعين لهذه المقابلة عبر وسائل التواصل الاجتماعي. إن التطويبات هي مسيرة قداسة ، نسير فيها لنصبح تلاميذًا حقيقيين للمسيح. إنها الطريق الوحيد لنصير مثله ، وننعم بملكوته ، وننال الفرح الحقيقي. ليبارككم الرب جميعا ويحرسكم دائما من الشرير!
[ I greet all the Arabic-speaking faithful who follow this audience through the means of social communication! The Beatitudes represent a path of holiness, on which we walk to become true disciples of Christ. I am the only way to follow His example, to become like Him, and thus welcome His Kingdom and obtain true joy. The Lord bless you all and always protect you from the evil one! ]
Drodzy Polacy, serdecznie pozdrawiam każdego z was i wasze rodziny. Pojutrze rozpoczniemy maryjny miesiąc maj. Pozostając w domach z powodu pandemii, wykorzystajmy ten czas do odkrycia na nowo piękna modlitwy różańcowej i tradycji nabożeństw majowych. Z rodziną, bądź indywidualnie, wpatrujcie się w każdej chwili w Oblicze Chrystusa iw serce Maryi. Niech Jej matczyne orędownictwo pomoże wam przetrwać czas tej szczególnej próby. Z serca wam błogosławię.
[ Dear Poles, I cordially greet each of you and your families. The day after tomorrow we will begin the Marian month, the month of May. Staying in the houses because of the pandemic, we use this time to rediscover the beauty of praying the Rosary and the tradition of Marian functions. In the family, or individually, at any time fix your gaze on the face of Christ and the heart of Mary. Her maternal intercession will help you face this time of particular trial. I bless you from my heart .]
* * *
I greet the Italian-speaking faithful. Today we celebrate the feast of Saint Catherine of Siena, co-patron of Italy. This great figure of woman drew from communion with Jesus the courage of action and that inexhaustible hope that supported her in the most difficult hours, even when everything seemed lost, and allowed her to influence others, even at the highest civil and ecclesiastical levels, with the strength of his faith. May his example help each one to know how to unite, with Christian coherence, an intense love of the Church with an effective concern for the civil community, especially in this time of trial. I ask Saint Catherine to protect Italy during this pandemic; and that it protects Europe, because it is the patron saint of Europe, that it protects all Europe so that it remains united.
I address a special thought to young people, the elderly, the sick and newlyweds. I urge everyone to be witnesses of the risen Christ who shows his disciples the now glorious wounds of his Passion. I cordially bless you.
Full Text + Image Source: Vatican.va Unofficial Translation -
Posted by Jesus Caritas Est at 11:46 AM