At Mass, Pope Francis Prays for those who Bury the Dead and says Our Victory is "Our Faith" in Jesus - Full Text 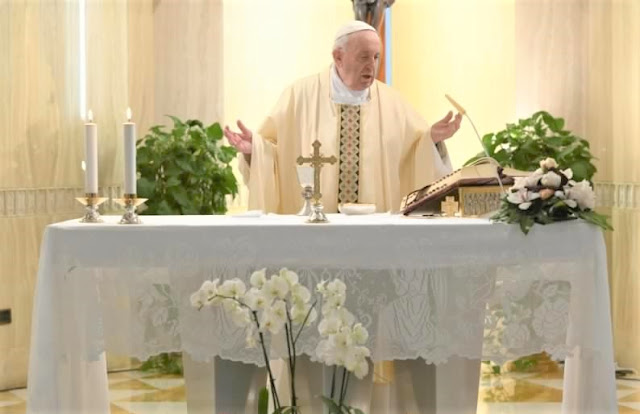 MORNING CELEBRATION BROADCASTED LIVE
FROM THE SANTA MARTA CHAPEL
HOMILY OF THE HOLY FATHER FRANCIS
"Christ dead and risen for us: the only medicine against the spirit of worldliness"
Saturday, May 16, 2020

Introduction
Let us pray today for the people who care about burying the deceased in this pandemic. It is one of the works of mercy to bury the dead and it is not a pleasant thing, of course. We pray for them, who risk their lives and take the infection.
Homily
Jesus several times, and especially in his farewell with the apostles, speaks of the world (cf. Jn 15 : 18-21). And here he says: "If the world hates you, know that it hated me before you" (v. 18). It clearly speaks of the hatred that the world has had towards Jesus and will have towards us. And in the prayer he makes at the table with the disciples at the Supper, he asks the Father not to remove them from the world, but to defend them from the spirit of the world (cf. Jn 17:15).
I think we can ask ourselves: what is the spirit of the world ? What is this worldliness, capable of hating, of destroying Jesus and his disciples, or rather of corrupting them and corrupting the Church? How is the spirit of the world, what is this, it will do us good to think about it. It is a life proposition , worldliness. But someone thinks that worldliness is to party, to live in the holidays ... No, no. Worldliness may be this, but it is not fundamentally this.
Worldliness is a culture; it is a culture of the ephemeral, a culture of appearing , of make-up , a culture "of today yes tomorrow no, tomorrow yes and today no". It has superficial values. A culture that knows no fidelity, because it changes according to the circumstances, negotiates everything. This is worldly culture, the culture of worldliness. And Jesus insists on defending us from this and prays for the Father to defend us from this culture of worldliness. It is a throwaway culture , according to what is convenient. It is a culture without loyalty, it has no roots. But it is a way of life, a way of life also for many who call themselves Christians. They are Christians but they are worldly.
Jesus, in the parable of the seed that falls to the earth, says that the worries of the world - that is, of worldliness - suffocate the Word of God, do not let it grow (cf. Lk 8,7). And Paul to the Galatians says: "You were slaves to the world, to worldliness" (cf. Gal 4: 3). It always strikes me when I read the last pages of Father de Lubac's book: "The meditations on the Church" (cf Henri de Lubac, Meditations on the Church, Milan 1955), the last three pages, where he speaks precisely of spiritual worldliness. And he says it is the worst of the evils that can happen to the Church; and do not exaggerate, because then he says some evils that are terrible, and this is the worst: spiritual worldliness, because it is a hermeneutic of life, is a way of life; also a way of living Christianity. And to survive before the preaching of the Gospel, he hates, he kills.
When it is said of martyrs who are killed in hatred of faith, yes, indeed for some, hatred was for a theological problem; but they weren't the majority. In the majority [of cases] it is worldliness that hates faith and kills them, as it did with Jesus.
It is curious: the worldliness, someone can tell me: "But father, this is a superficiality of life ...". Let's not fool ourselves! Social life is not superficial at all! It has deep roots, deep roots. It is chameleon-like , changes, comes and goes according to circumstances, but the substance is the same: a proposal of life that enters everywhere, even in the Church. The worldliness, worldly hermeneutic, the makeup , everything is being abused for being so.
The apostle Paul came to Athens, and was impressed when he saw so many monuments to the gods in the areopagus. And he thought of talking about this: "You are a religious people, I see this ... I am drawn to that altar to the 'unknown god'. I know this and I come to tell you who it is ”. And he began to preach the gospel. But when he arrived at the cross and resurrection they were scandalized and went away (cf Acts 17,22-33). There is one thing that worldliness does not tolerate: the scandal of the Cross . He does not tolerate it. And the only medicine against the spirit of worldliness is Christ who died and rose for us, scandal and foolishness (cf. 1 Cor 1:23).
This is why when the apostle John in his first letter deals with the theme of the world he says: "It is the victory that has overcome the world: our faith" ( 1 Jn 5: 4). The only one: faith in Jesus Christ, dead and risen. And that doesn't mean being fanatic. This does not mean neglecting to have dialogue with all people, no, but with the conviction of faith, starting from the scandal of the Cross, from the foolishness of Christ and also from the victory of Christ. "This is our victory," says John, "our faith."
In the last days, even in the novena of the Holy Spirit, in the last days of Easter time, we ask the Holy Spirit for the grace to discern what worldliness is and what the Gospel is , and do not be deceived, because the world hates us, the world has hated Jesus and Jesus prayed that the Father would defend us from the spirit of the world (cf. Jn 17.15).
Prayer for spiritual communion
My Jesus, I believe that you are truly present in the Blessed Sacrament of the altar. I love you above all things and I desire you in my soul. Since I cannot receive you sacramentally now, at least spiritually come to my heart. As already come, I embrace you and I join you all. Don't let it ever separate me from you.
FULL TEXT + Image Source: Vatican.va - a Translation from Italian