Pope Francis Prays for Workers and Proper Wages on the Feast of St. Joseph at Mass - FULL TEXT + Video 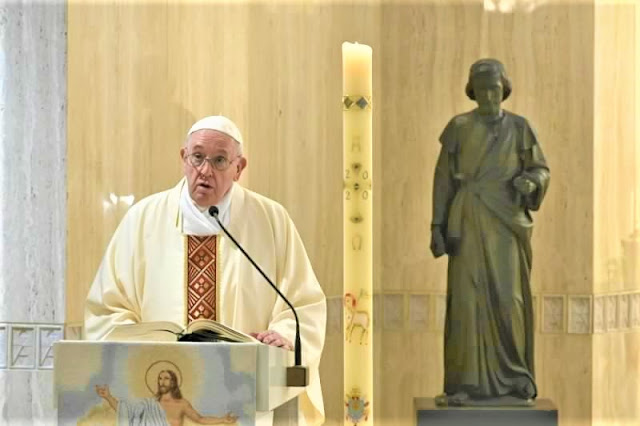 MORNING CELEBRATION BROADCASTED LIVE
FROM THE CHAPEL OF CASA SANTA MARTA
HOMILY OF THE HOLY FATHER FRANCIS
"Work is the vocation of man"
Friday, May 1, 2020

Introduction
Today is the feast of St. Joseph the worker, and the Workers' Day. We pray for all workers. For everyone. So that no one misses his job and that everyone is properly paid and can enjoy the dignity of work and the beauty of rest.
Homily
"And God created" ( Gen 1:27). A Creator. He created the world, created man, and gave a mission to man: manage, work, carry on creation. And the word work is the one that the Bible uses to describe this activity of God: "He completed the work he had done and ceased all his work on the seventh day " ( Gen 2 : 2). And he gives this activity to man: "You must do this, keep that, that other, you must work to create with me - it is as if he were saying this - this world, to go on" (cf. Gen2,15.19-20). So much so that work is only the continuation of God's work: human work is the vocation of man received from God at the end of the creation of the universe.
And work is what makes man like God, because with work man is creator, he is capable of creating, of creating many things; also to create a family to move forward. Man is a creator and creates with work. This is the calling. And the Bible says that "God saw what he had done and behold, it was a very good thing" ( Gen 1:31). That is, work has goodness within it and creates the harmony of things - beauty, goodness - and involves humans in everything: in  thought, in his action, everything. Humans are involved in working. It is the first vocation of humans: to work. And this gives dignity to humans. The dignity that makes one  look like God. The dignity of work.
Once, in a Caritas, to a man who had no job and went to look for something for the family, a Caritas employee [gave something to eat] and said: "At least he can bring bread home" - " But this is not enough for me, it is not enough ", was the reply:" I want to earn bread to take it home ". He lacked the dignity, the dignity of "making" the bread he, with his work, and bringing it home. The dignity of work, which is so much trampled on, unfortunately.
In history we have read the brutality they did with slaves: they brought them from Africa to America - I think of that story that touches my land - and we say: "How much barbarism!". But even today there are many slaves, many men and women who are not freeto work: they are forced to work to survive, nothing more. They are slaves: forced labor ... There are forced labor, unjust, poorly paid and which lead man to live with trampled dignity. There are many, many in the world. Many. In the newspapers a few months ago we read, in an Asian country, how a gentleman had beaten an employee who earned less than half a dollar a day because he had done something wrong. Today's slavery is our "in-dignity", because it takes away the dignity of man, woman and all of us. "No, I work, I have my dignity." Yes, but your brothers, no. “Yes, Father, it is true, but this, since it is so far away, it is hard for me to understand it. But here with us ... ". Here too, with us. Here, with us. Think of the workers, the day workers, that you make work for a minimum wage and not eight, but twelve, fourteen hours a day: this happens today, here. All over the world, but also here. Think of the maid who has no fair wages, who does not have social security assistance, who does not have pension capacity: this does not happen in Asia alone. Here.
Every injustice that occurs on a working person is trampling on human dignity; also the dignity of what injustice does: it lowers the level and ends in that tension of dictator-slave. Instead, the vocation that God gives us is so beautiful: create, re-create, work. But this can be done when the conditions are right and the dignity of the person is respected.
Today we join many men and women, believers and non-believers, who commemorate Worker's Day, Labor Day, for those who struggle for justice in the work, for those - good entrepreneurs - who carry out their work with justice even if they lose us. Two months ago I heard an entrepreneur on the phone here, in Italy, asking me to pray for him because he didn't want to fire anyone and he said: "Because firing one of them is firing me". This awareness of many good entrepreneurs, who keep workers as if they were children. Let us pray for them too. And we ask St. Joseph - with this icon [a statue placed near the altar] so beautiful, with the work tools in his hand - to help us fight for the dignity of the work, because there is work for everyone and that it is worthy work. I don't slave. May this be prayer today.
Prayer to make spiritual communion
People who cannot make sacramental communion now make spiritual communion:
At your feet, O my Jesus, I bow down and offer you the repentance of my contrite heart that abysses itself in its nothingness and in your holy presence. I adore you in the sacrament of your love, the ineffable Eucharist. I wish to receive you in the poor abode that my heart offers you. In anticipation of the happiness of sacramental communion, I want to possess you in spirit. Come to me, my Jesus, that I come to you. May your love inflame my whole being for life and death. I believe in you, I hope in you, I love you.
Full Text + Image Source: Vatican.va - a Translation from Italian
Posted by Jesus Caritas Est at 8:59 AM