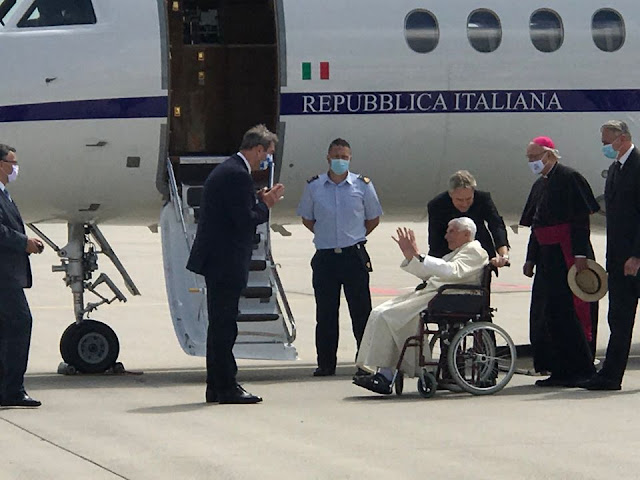 Vatican News reports that Pope emeritus Benedict XVI returned to the Vatican. He returned to the Vatican on Monday after visiting his ill brother in Germany.  Pope emeritus Benedict XVI returned following a five-day trip to Germany where he visited his 96-year-old brother, Georg. The Pope emeritus arrived in Munich last Thursday. Benedict XVI visits his sick brother in Germany As well as visiting his older brother, Benedict XVI took advantage of his last day in Munich to visit the Ziegetsdorf cemetery where his parents and older sister are buried. He prayed briefly at their tombs, before blessing their graves with holy water. He also paid a visit to his old home in Pentling, on the outskirts of Regensburg, where he worked as professor of Dogmatics at the city’s university before his appointment as Archbishop of Munich and Freising in 1977. The house is now the headquarters of the Benedict XVI Institute, which preserves his theological heritage. Benedict XVI also met with the nuncio to Germany, Archbishop Nikola Eterović, who in the years of his pontificate had served as Secretary General of the Synod of Bishops. Pope emeritus Benedict XVI last visited Germany during an official papal visit in 2006.
Source: Edited from Vatican News - Image Source Facebook
Posted by Jesus Caritas Est at 9:55 PM