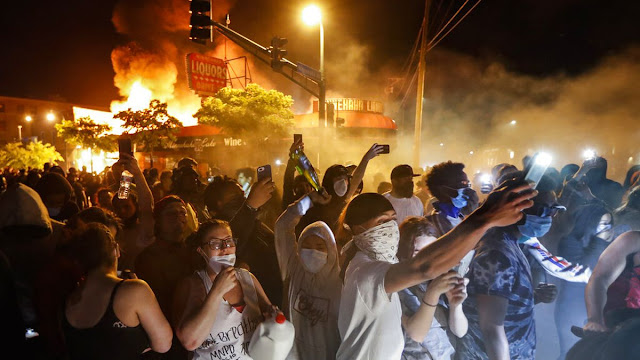 George Floyd, was an African-American killed by police in Minneapolis, Minnesota on May 25, 2020. His death was recorded on video - a police officer held Mr. Floyd with his knee on his neck for 8 minutes which caused his death. Protests began on May 26, 2020 in many US cities; they quickly became violent and curfews were given to prevent further danger. From the beginning of the protests dozens of police vehicles were burned to the ground as was the police department building in Minneapolis. Store owners have seen their businesses looted and vandalized throughout the USA. Many churches were damaged and graffiti sprayed on their walls. Among those 17 people killed during the protests over the death of George Floyd are a retired police captain, a beloved owner of a barbecue restaurant, and a former star football player known as “Mr. Indianapolis.”

According to Fox News as of Monday, June 8, a tally shows 17 people have died in incidents resulting from the unrest following Floyd’s May 25 death. The following is a list of names of those killed:


David Dorn, a 77-year-old retired St. Louis police captain was shot and killed on June 2 by looters who broke into a pawn shop. Dorn went to the pawn shop to check on a burglar alarm.

David McAtee, the 53-year-old owner of a barbecue restaurant was shot and killed on June 1 in Louisville. Police and the National Guard troops were trying to clear a crowd when they heard gunshots and returned fire.

Chris Beaty, 38, who played football for Indiana University and was known as “Mr. Indianapolis,” was shot and killed on the street in downtown Indianapolis on May 30 during a protest.

Dorian Murrell, 18, was fatally shot in Indianapolis the same night as Beaty.

Cops say the man who shot him, Tyler Newby, 29, told police the shooting happened after he and friend found a gas canister on the ground as they were walking around downtown after the protests.

Italia Kelly, 22, was shot and killed June 1 in Davenport, Iowa, as she was leaving a protest outside a Walmart.

Marquis Tousant, 23, of Rock Island, Ill., was shot and killed in Davenport the same night as Kelly.

He was found dead near where police say one or more persons fired 13 shots at an unmarked police truck investigating a suspicious car in an alley around 3 a.m., the Des Moines Register reported.


Patrick Underwood, 53, a federal officer, died as he was providing security at a U.S. courthouse in Oakland, Calif., during a protest when someone fired shots from a vehicle. Another officer was critically wounded.

Calvin Horton Jr., a 43-year-old black man was fatally shot outside a Minneapolis pawn shop on May 27, two days after Floyd’s death. The 59-year-old owner was later booked into jail on suspicion of murder and then released as the investigation continues, the Minneapolis Star Tribune reported.

James Scurlock, a 22-year-old black man, was killed Saturday after authorities said he tussled with the owner of two downtown bars. Surveillance video of the strip of bars shows a group of people, including Scurlock, approach white bar owner Jake Gardner.

Javar Harrell, a 21-year-old man, was killed in downtown Detroit on June 5 after someone fired shots into a vehicle during a protest.

Barry Perkins III, 29, of St. Louis, was killed May 30 after climbing between two trailers of a FedEx truck during an interstate protest near downtown St. Louis.

Jorge Gomez, 25, of Las Vegas, was shot fatally shot by officers breaking up a protest in downtown Las Vegas on June 1.Police said the officers opened fire after Gomez pointed a gun at them.

Jose Gutierrez, 28, of Chicago, was fatally shot during unrest following a protest in Cicero on June 1, according to reports.

Zion Haygood of Chicago has been charged with first-degree murder in the shooting.

Victor Cazares Jr., 27, was fatally shot near a grocery store in Cicero the same night as Gutierrez in a separate incident. Cazares was from Cicero.
Marvin Francois, 50, was shot and killed May 31 after a protest in Kansas City, Mo., according to reports.

Two unidentified males - A suspected looter was killed Tuesday breaking into a gun shop after protests in Philadelphia, police said.

The man was shot and killed by the owner of the gun shop, Greg Isabella, who said he saw a group of looters on his surveillance video breaking a padlock on his gate with bolt cutters.

On the same night of the looting incident at Isabella’s gun shop, a 24-year-old looter was killed trying to blow up a sidewalk ATM in Philadelphia, police said.

His name has not been released.
Posted by Jesus Caritas Est at 3:48 PM