Pope Francis says "Prayer gives us nobility. it is capable of securing their relationship with God who is the true Companion..." Full Text/Video 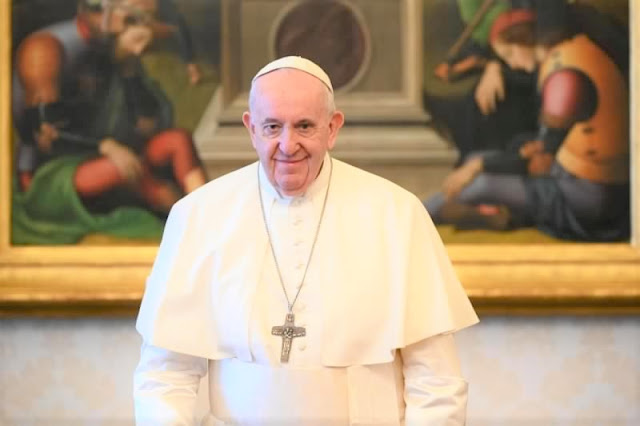 GENERAL AUDIENCE
Library of the Apostolic Palace
Wednesday, 24 June 2020
Catechesis on prayer - 8. The prayer of David


Dear Brothers and Sisters, good morning!
On the itinerary for the catechesis on prayer, today we meet King David. Favoured by God even from his youth, he is chosen for a unique mission that would play a central role in the history of the people of God and in our own faith. In the Gospels, Jesus is called “son of David” a number of times; like him, in fact, He is born in Bethlehem. According to the promises, the Messiah would come from the descendants of David: a King completely after God’s heart, in perfect obedience to the Father, whose action faithfully realises His plan of salvation (see Catechism of the Catholic Church, 2579).
David’s story begins on the hills surrounding Bethlehem, where he grazes the flock of his father, Jesse. He is still a boy, the last of many brothers. So much so that when the prophet Samuel, acting on God’s order, goes in search of the new king, it almost seems that his father has forgotten about his youngest son (see 1 Sam 16:1-13). He worked in the open air: we can think of him as a friend of the wind, of the sounds of nature, of the sun’s rays. He has only one companion to comfort his soul: his harp; and during those long days spent in solitude, he loves to play and to sing to his God. He also played with the slingshot.
David is, therefore, first of all a shepherd: a man who takes care of animals, who defends them from oncoming danger, who provides for their sustenance. When by God’s will David will have to care for his people, the things he will do will not be very different. This is why the image of the shepherd frequently occurs in the Bible. Even Jesus defined Himself as “the good shepherd”, whose behaviour is different than that of the mercenary; He offers His life on behalf of the sheep, He guides them, He knows each one by name (see Jn 10:11-18).
David had learned a lot from his previous job. So, when the prophet Nathan reproves him for his very serious sin (see 2 Sam 12:1-15), David understands right away that he had been a bad shepherd, that he had despoiled another man of his only sheep that he loved, that he was no longer a humble servant, but a man who was crazy for power, a poacher who looted and preyed on others.
A second characteristic trait present in David’s vocation is his poet’s soul. From this small observation, we can deduce that David was not a vulgar man, as is often the case with individuals who are forced to live for long periods in isolation from society. He is, instead, a sensitive person who loves music and singing. His harp would accompany him always: sometimes to raise a hymn of joy to God (see 2 Sam 6:16), other times to express a lament, or to confess his own sin (see Ps 51:3).
The world that presented itself before his eyes was not a silent scene: as things unraveled before his gaze he observed a greater mystery. That is exactly where prayer arises: from the conviction that life is not something that takes us by surprise, but a stupefying mystery that inspires poetry, music, gratitude, praise, even lament and supplication in us. When a person lacks that poetic dimension, let’s say, when poetry is missing, his or her soul limps. Thus, tradition has it that David is the great artist behind the composition of the Psalms. Many of them at the beginning bear an explicit reference to the king of Israel, and to some of the more or less noble events of his life.
David, therefore, has a dream: that of being a good shepherd. Sometimes he will live up that that task, other times less so; what is important, however, in the context of the history of salvation, is that he is a prophecy of another King, whom he merely announces and prefigures.
Look  at David, think about David. Holy and sinful, persecuted and persecutor, victim and murderer, which is a contradiction. David was all of this, together. And we too have recorded events in our lives that are often opposed to each other; in the drama of life, all people often sin because of inconsistency. There is one single golden thread running through David’s life, that gave unity to everything that happened: his prayer. That is the voice that was never extinguished. David the saint prays: David the sinner prays; David, persecuted, prays; David the persecutor prays. Even David the murderer prays. This is the golden thread running through his life. A man of prayer. That is the voice that is never silenced. Whether it assumed tones of jubilation or lament, it is always the same prayer, it is only the melody that changes. In so doing, David teaches us to let everything enter into dialogue with God: joy as well as guilt, love as well as suffering, friendship as much as sickness. Everything can become a word spoken to the “You” who always listens to us.

David, who knew solitude, was in reality never alone! In the end, this is the power of prayer in all those who make space for it in their lives. Prayer gives you nobility, and David is noble because he prays. But he is a murderer who prays; he repents and his nobility returns thanks to prayer. Prayer gives us nobility. it is capable of securing their relationship with God who is the true Companion on the journey of every man and woman, in the midst of life’s thousand adversities, good or bad: but always prayer. Thank you, Lord. I am afraid, Lord. Help me, Lord. Forgive me, Lord. David’s trust is so great that, when he was persecuted and had to flee, he did not let anyone defend him: “If my God humiliates me thus, He knows what He is doing”, because the nobility of prayer leaves us in God’s hands. Those hands wounded by love: the only sure hands we have.
***************
Greetings in Various Languages
Je salue cordially les pèlerins de langue française. Comme le roi David, demeurons toujours en présence de Dieu, et dans un dialogue confiant disons-lui nos joies et nos peines, nos fautes et nos souffrances. Il est notre companon de route dans toutes les circonstances de notre vie.
[ I cordially greet the French-speaking pilgrims. Like King David, we always remain in the presence of God, and in a confident dialogue we talk to him about our joys and sorrows, our shortcomings and our sufferings. The Lord is our travel companion in all circumstances of our lives. My blessing to all! ]
I greet the English-speaking faithful joining us through the media. Upon you and your families I invoke the joy and peace of the Lord. May God bless you!
[ I greet the English-speaking faithful connected through social media. I invoke upon you and your families the joy and peace of the Lord. God bless you! ]
Herzlich grüße ich die Gläubigen deutscher Sprache. Vertrauen wir uns ganz, auch mit unseren Sünden und Schwächen, Christus, dem Guten Hirten an. Mit seinem gütigen und demütigen Herzen bietet er uns in unserem Leben immer Vergebung und Trost an, um uns zur Freude und Herrlichkeit des Vaters zu führen.
[ I warmly greet the German-speaking faithful. Let us entrust ourselves entirely, even with our sins and weaknesses, to Christ, the Good Shepherd, who with his meek and humble heart always offers us forgiveness and comfort in our lives to lead us to the joy and glory of the Father .]
I cordially greet a los fieles de lengua española, que siguen esta catequesis a través de los medios de comunicación social. Ayer a violent earthquake nitrogen el sur de México, causing algunas víctimas, heridos y enormes daños. Rezamos por todos ellos. That the ayuda de Dios y de los hermanos les dé fuerza y ​​apoyo. Hermanos y hermanas les estoy muy are looking for. Hoy celebramos la memoria de san Juan Bautista, prophet precursor of the Mesías. Que su ejemplo, como también el del rey David —dos hombres totally diferentes que vivieron la profecía y que supieron indicar dónde estaba el verdadero Dios—, sean estímulo para nuestra vida, para que busquemos la amistad de Dios a través de la oración, y nuestro ejemplo pueda ayudar a llevar a Dios a los hombres y los hombres a Dios. Que el Señor los bendiga.
De coração saúdo a todos vós, amados ouvintes de língua portuguesa, desejando que eventuais nuvens sobre o vosso caminho não vos impeçam jamais de irradiar e enaltecer a glória a esperança depositadas em vós, always singing and saying at all times. tudo to Deus Pai. Assim Deus vos abençoe!
[I warmly greet all of you, dear Portuguese-speaking listeners, and I wish you that any clouds on your way will never prevent you from radiating and exalting the glory and hope deposited in you, always singing and praising the Lord in your hearts, thanking God the Father for everything. So God bless you! ]

أحيي جميع المؤمنين الناطقين باللغة العربية ، المتابعين لهذه المقابلة عَبر وسائل التواصل الاجتماعي. الصلاة هي مفتاح السماء وهي السلّم الذي نصعد به إلى الله. يعلمنا داود أن نحوّل إلى صلاة أفراحنا واحزاننا ، همومنا وآمالنا ، مخاوفنا وانتصاراتنا ، هكذا تصبح ح. ليبارككم الربّ جميعًا ويحرسكم دائمًا من كلّ شر!
[ I greet the Arabic-speaking faithful who follow this audience through the social media. Prayer is the key to heaven and the ladder to go up to God. David teaches us to transform our joys and sorrows, our worries and our hopes, our fears and our victories into prayer, so our life becomes prayer and our prayer becomes life. The Lord bless you all and always protect you from all evil! ]
Serdecznie pozdrawiam wszystkich Polaków. Drodzy burns the siostry, wchodzimy w okres wakacji. Pomimo wszystkich środków bezpieczeństwa związanych z zagrożeniem zarażenia korona-wirusem, niech to będzie spokojny czas odpoczynku, korzystania z piękna natury i umacniania więzi z ludźmi iz Bog. Idąc za przykładem Dawida, módlmy się do Pana w chwilach dobrych i złych, i chwalmy Go za każdą łaskę, jaką otrzymujemy z Jego Serca pełnego miłości dla nas. Jego błogosławieństwo niech wam zawsze towarzyszy!
[ I cordially greet all the Poles. Dear brothers and sisters, we are entering the holiday season. Despite all the security measures related to the threat of the crown-virus infection, this is a peaceful time of rest, of enjoying the beauty of creation and strengthening ties with men and with God. Following the example of David, let us pray the Lord for better or for worse, and let us praise him for every grace we receive from his heart full of love for us. May his blessing always accompany you! ]

* * *
I greet the Italian-speaking faithful. I hope that the summer can be a time of serenity and a beautiful opportunity to contemplate God in the masterpiece of His creation.
I address my thoughts to the elderly, young people, the sick and newlyweds. Today is the feast of the Nativity of Saint John Baptist. We learn from the One who was Jesus' forerunner the ability to courageously testify to the Gospel, beyond one's differences, preserving the harmony and friendship that underpin the credibility of any proclamation of faith. My blessing to all!
FULL TEXT + Image Source: Vatican.va -  Translation from the Italian