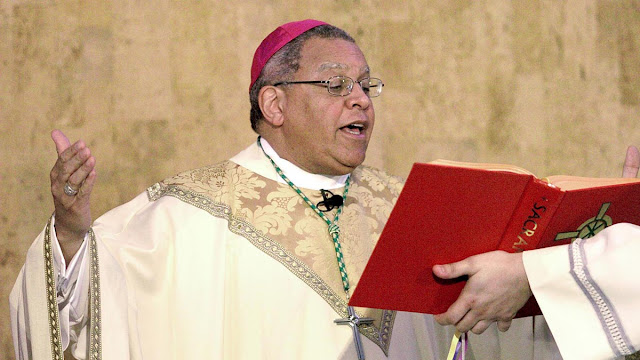 Upon his appointment, Bishop Murry stated: “I am honored to accept the Holy Father’s appointment to serve as Bishop of Youngstown and I look forward to meeting and working with the priests, deacons, religious and laity of the diocese.” Later during Mass in the Cathedral, he preached about remaining in God’s love by holding on to Jesus and walking with him.

Bishop Murry was born in Camden, New Jersey, in 1948. After graduating from Catholic elementary and high schools, he attended St. Joseph’s College in Philadelphia, Pennsylvania, St. Thomas Seminary in Bloomfield, Connecticut, and St. Mary’s Seminary in Baltimore, Maryland where he received a bachelor’s degree in Philosophy in 1972. That same year he entered the Society of Jesus. He was ordained for the Maryland Province of the Society of Jesus on June 9, 1979. He earned a Masters of Divinity degree from the Jesuit School of Theology in Berkeley in 1979 and a doctorate in American Cultural History from George Washington University in Washington, D.C., in 1994.

Bishop Murry has served on numerous boards including St. Joseph University, Philadelphia, Pennsylvania, the University of Detroit, Detroit, Michigan, Fairfield University, Fairfield, Connecticut and Walsh University, Canton, Ohio.  He is a member of the United States Conference of Catholic Bishops and has served as Secretary of the Conference, Chairman of the Committee on Priorities and Plans and presently serves as Chairman of the Committee Against Racism.  He also has served as a member of the Board of Directors of Catholic Relief Services.


THE COAT OF ARMS OF MOST REVEREND GEORGE V. MURRY, S.J., PH.D.
By heraldic tradition, the arms of the bishop of a diocese are joined with the arms of his diocese that are seen on the left side of the design. The coat of arms of the Diocese of Youngstown are composed of a green field on which is displayed a silver wavy bar (called a fess) to represent the Mahoning River that flows through the See City. Upon the wavy fess are two green arrowheads to honor the Native American peoples that first inhabited the area that is now Youngstown and a cross pommetté. The green cross pommetté is taken from the arms of the Diocese of Cleveland from which the Diocese of Youngstown was carved in 1943.

This separation on the new diocese is further symbolized by the golden dove placed in the arms above the wavy fess. The word dove in Latin is “columba,” and is taken from the arms of Pope Pius XII, who created the new diocese. It additionally honors the titular of the cathedral church in the See City. Below the wavy fess is a golden anvil to honor, represent and acknowledge the industrial landscape that is northeastern Ohio.

For his personal arms, seen in the right side of the shield, Bishop Murry has retained the arms that he adopted at the time of his selection to receive the fullness of Christ’s most holy priesthood, as a bishop, when he became an auxiliary bishop for the Archdiocese of Chicago, and which he retained during his tenure as Bishop of Saint Thomas, in the United States Virgin Islands.

The Bishop’s personal arms are composed of three sections. The upper portion is a blue field on which is seen the monogram of The Holy Name (IHS). This is a central feature of the arms of the Bishop’s religious community, the Society of Jesus, and it is by this symbol that Bishop Murry acknowledges the integral part of his life that is “as a Jesuit.” In the central portion of the design, on a golden field, is a red phoenix with gold fleur-de-lis on each wingtip. This is a symbol taken from the arms of the Archdiocese of Chicago where His Excellency had the honor to serve as an Auxiliary Bishop. In the base portion, on a white field is a red cross. This configuration is known as a Cross of Saint George and by its use Bishop Murry honors his baptismal patron.

For his motto Bishop Murry continues to use the phrase CHRIST MY LIGHT. By the use of this phrase, he expresses that for the Christian to find his way, one needs a light to follow or a light to find the path on which to go. In either case, that light is Christ, to show the way and to be the goal at the end of the journey.

The achievement in completed by the external ornamentation which are a gold processional cross, and the pontifical hat, called a gallero, with its six tassels in three rows on either side of the shield, all in green. These are the heraldic insignia of a prelate of the rank of bishop, by instruction of The Holy See, of March 31, 1969.

Rev. Mr. Sullivan is a Deacon of the Diocese of Providence (RI-USA)

Bishop Murry was installed as the fifth Bishop of the Diocese of Youngstown on March 28, 2007. He succeeds Bishop Thomas J. Tobin who was installed as Bishop of Providence, Rhode Island on May 31, 2005.
Source: https://doy.org/
Posted by Jesus Caritas Est at 3:35 PM