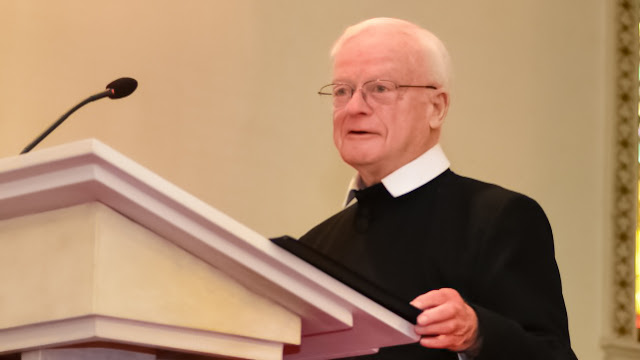 In Memoriam:
The Very Rev. Jonathan Robinson died the morning of June 3 in his room at home, after a brief illness. Father Robinson was 91 years old and at the beginning of his 59th year as a priest. He was ordained for the Archdiocese of Montreal, where he served as Paul-Emile Cardinal Leger’s Secretary for several years. Father was Chairman of the Philosophy Department at McGill University when he felt called to establish a house of the Oratory of St Philip Neri in Montreal. The Holy See formally erected the Montreal Oratory in 1975, and the Visitor of the Confederation of the Oratory blessed the young community’s move to Toronto in 1979. While in Toronto, Fr Robinson served as Provost of the Toronto Oratory, as well as Rector of St Philip’s Seminary. At various times he also held the position of Pastor at both Holy Family and St Vincent de Paul Churches. He wrote several popular books of spirituality, including Spiritual Combat Revisited. Donations in Father Robinson’s memory may be made to the Toronto Oratory Renovatio Fund, dedicated to the construction of a new seminary building, a project dear to his heart. Messages of condolence can be left on our Facebook, Twitter, or Instagram.
FULL TEXT Source: https://oratory-toronto.org/
Posted by Jesus Caritas Est at 1:51 PM