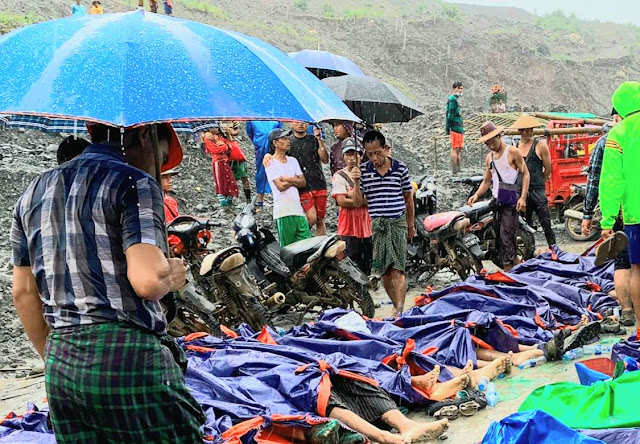 Asia News reportMyanmar, 162 victims in jade mine accident
A landslide caused by heavy monsoon rains buried the miners. Only the floating bodies have been recovered, many are still under the sea of mud and dirt. At the moment there are also 54 injured, hospitalized in the area. The Burmese mining industry is worth billions of dollars, but the proceeds remain in the hands of the military and the former rulers.


Yangon (AsiaNews / Agencies) - The official death toll from yesterday’s landslide in a jade mine in Kachin State, in northern Myanmar, on the border with China, has risen to 162.

Experts report that it is one of the worst catastrophes in the country's recent history, with the miners swept away by a torrent of water and mud caused by heavy monsoon rains. Authorities warn that the number of victims is expected to rise because there more bodies are still buried under a sea of mud.
The victims reportedly ignored the warnings of security chiefs, who had advised against going to the area because of the abundant seasonal rainfall.

Moreover, the mining industry is one of the main national resources, with a turnover of billions of dollars in precious extracts from the mountains each year to meet the demand, in particular from China.

The mines are shrouded in secret, although according to several environmental groups, including Global Witness, the proceeds of the sale are the prerogative of the army leaders and representatives close to the military junta that held power for decades in the former Burma.

Activists and civil society representatives hope that this incident will serve as a "wake-up call" for the Myanmar government led by Aung San Suu Kyi, whose party has promised reforms and fighting corruption without achieving the objective so far.

According to the latest data available in 2014, the total value of Myanmar's mining industry is around $ 31 billion. However, a small part of them are also redistributed to the population, which is largely excluded from the proceeds of the sale.

Rescue operations also continue today, but are hampered by the heavy rains that continue incessantly in the area. Local sources report that the accident was triggered by a collapse of a part of the mountain which poured huge quantities of mud into a waste water lake below, while workers sought shelter on the top.

Police commissioner Than Win Aung reports that the rescuers managed to recover "only the bodies that floated to the top", while dozens are buried by the mudslide and their recovery appears unlikely due to the extreme danger of the operations. There are also 54 wounded at the moment, who have been transported to various hospitals in the area.

Landslides and floods are frequent in Myanmar, especially during the monsoon season. In November 2015, a similar accident killed over 100 people. Last year more than 50 workers were buried in a landslide.
Full Text Source: Asia News IT
Posted by Jesus Caritas Est at 8:53 AM