Cardinal Bo, the Head of Asian Bishops, Calls All Believers to Pray for Hong Kong and China in Letter on New Security Law 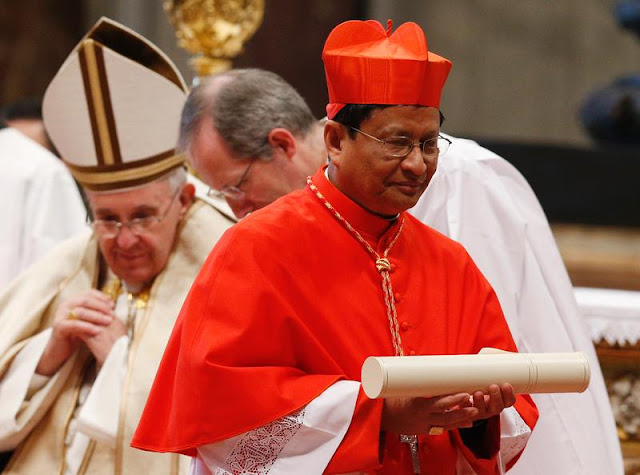 
Rangoon (AsiaNews / EdA) - "Christians of all traditions and all believers in Asia and the world pray for Hong Kong, for China and for its people". This is the appeal launched by Cardinal Charles Maung Bo, archbishop of Rangoon and president of the Federation of Asian Bishops' Conferences (FABC), at the beginning of July in a letter on the entry into force of the national security law in Hong Kong, "without consultation of the local population".

This law, says Card. Bo, weakens the freedoms in Hong Kong and threatens the "high degree of autonomy" promised according to the "one country, two systems" principle. This represents a veritable constitutional change and contradicts the spirit of the agreement to hand over the special administrative region to China in 1997. Hong Kong is one of Asia's jewels, a "Pearl of the East", a crossroads between East and West, a gateway to China and a regional free trade center.

“So far, Hong Kong has enjoyed a mix of freedom and creativity. A national security law is not bad in itself. Every country has the right to legislate to protect and maintain its security. But this legislation must be balanced by guaranteeing respect for human rights, human dignity and fundamental freedoms. The imposition of this law by the Chinese National Congress clearly weakens the Hong Kong Legislative Council and its autonomy. It radically transforms its identity ”.

“I am concerned about the threats this law poses to freedoms and human rights in Hong Kong. This legislation threatens to undermine freedom of expression, freedom of assembly, freedom of the press and academic freedom. Freedom of religion and belief is also under threat. According to many reports, freedom of religion and belief in mainland China has suffered the most violent attacks since the Cultural Revolution. Even if freedom of worship in Hong Kong is not directly or immediately affected, the new security law and criminal law it implies (for acts of 'subversion', 'secession' and 'complicity with foreign political forces'), for example, could lead to the control of religious preaching, the penalization of candlelit prayer vigils and harassment in places of worship for the protection or assistance of protesters. I pray that this law will not induce the government to interfere with the internal affairs of religious organizations and with the pastoral services they offer to the public. My brother priests and bishops must be able to prepare their homilies with confidence, as well as members of the Protestant clergy to prepare their sermons, as well as religious leaders from other faiths."

“The participation of religious organizations in social affairs must not be compromised. Indeed, the Basic Law guarantees freedom of worship. From now on, will religious leaders be prosecuted for defending human dignity, human rights, justice, freedom and truth? We have experienced how, as soon as freedom is threatened as a whole, sooner or later freedom of religion or worship is compromised ".

“For more than a year, there have been numerous protests in Hong Kong, most of which have been peaceful. However, more than 9,000 demonstrators were arrested and not a single police officer was prosecuted for disproportionate use of force. Everyone, demonstrators and police, must be equal before the law. "

This law, concludes the document, "risks increasing tensions rather than providing solutions. For these reasons and in the spirit of the prophets, martyrs and saints of our faith, today I invite you to pray for Hong Kong. Pray for leaders from China and Hong Kong that they may keep their promises to respect fundamental rights and freedoms. I invite all of you to pray for peace."
FULL TEXT Source: AsiaNews IT
Posted by Jesus Caritas Est at 3:09 PM