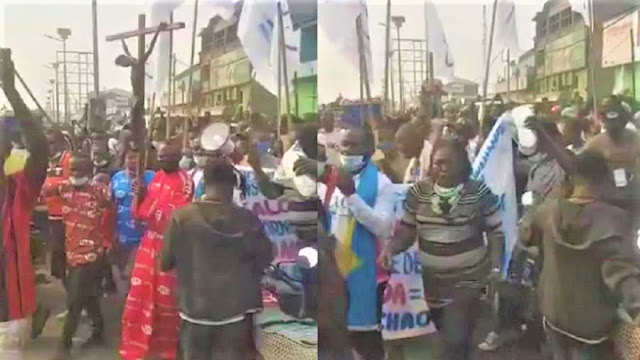 Kinshasa (Agenzia Fides) - "Our main request today is to clearly express refusal and indignation to have the so-called 'new animators' of the Independent National Electoral Commission (CENI) imposed, chosen from among those who bear the heavy responsibility for the failure of the fake elections of 2018". This is what the Lay Coordination Committee (LCC) - an organism that developed in the Congolese Catholic community - told Agenzia Fides following the peaceful march organized in Kinshasa on Sunday 19 July. Popular protest takes place in a political climate that has been tense for weeks. Congolese civil society is in turmoil for two reasons: the appointment of Ronsard Malonda as head of CENI; a bill to reform the judiciary under discussion in Parliament.
Ronsard Malonda is part of the team that led the Commission during the 2018 elections, criticized by various company platforms and international observers for poor transparency. Even the bill to reform the judiciary is criticized by various political and civil components, which see in it the attempt to subordinate this institution to the Ministry of Justice, therefore to submit the judicial power to the executive one.
"The LCC has welcomed the President of the Republic's decision not to approve the candidate it wants to impose as head of CENI. This is a step in the right direction. Furthermore, the LCC encourages the head of State to continue listening to legitimate aspirations of the people and, above all, to persevere in the same direction for all the other needs that justified our mobilization, as well as that of the other social and political forces of the nation", says the statement sent to Fides.
The march started by the LCC saw the participation of many civil society movements and took place without any incidents and without violence. Participants say they are ready to organize several demonstrations if the people's demands are not taken into consideration.
The considerations and manifestations of the LCC follow a recent message from the National Bishops’ Conference of the Democratic Republic of the Congo (CENCO) which, on the one hand, expressed concern about the draft law for the reform of the judiciary; on the other hand, on the reform of CENI, the Bishops recalled that "the Congolese have in mind the chaotic management of the 2018 elections. Many have even lost confidence in our electoral system. It is therefore necessary to reassure the future voters of 2023 that things will no longer be as before". (MP) (Agenzia Fides, 21/7/2020)