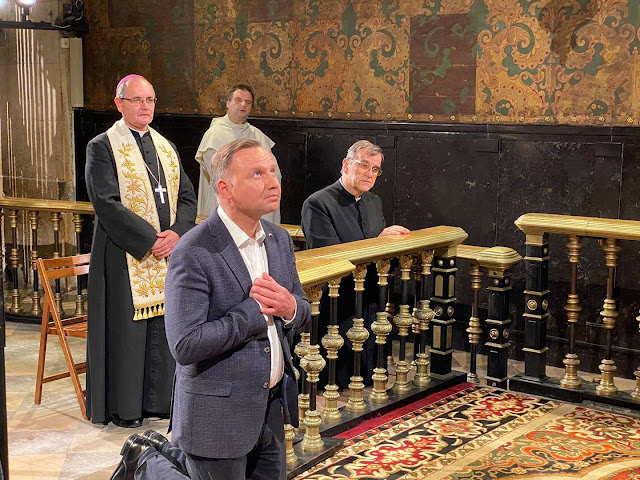 Conservative leader Andrzej Duda has won Poland’s presidential runoff election thereby gaining another five-year term in office, according to final results announced by electoral officials on Monday evening.
Andrzej Duda  with wife Agata Kornhauser-Duda addressed the Polish people.
With all the ballots counted, Duda had 51.03 percent of the vote, while opposition-backed challenger Rafał Trzaskowski, the mayor of Warsaw, had 48.97 percent, the National Electoral Commission (PKW) said.

After the victory the new Polish President Andrzej Duda visited the Shrine of Mary in Czestochowa on Monday after the runoff election and prayed there for his second term. "I feel spiritual support here," he said, according to a report by Domradios. During the visit to the sanctuary, there was applause for Duda, who is valued by Catholics in Poland for his family orientation and was also chosen by the majority of Catholics.
The picture above with President Duda kneeling before Our Lady at the shrine has gone viral on social media.

Voter turnout in Sunday's runoff was 68.18 percent, up from 64.51 percent in the first round of voting two weeks earlier, according to the National Electoral Commission.

Poland’s governing conservatives last fall won parliamentary elections for a second consecutive term, and have now consolidated their grip on power by maintaining control of the presidency.

The Polish president has the power to veto legislation passed by parliament, a key prerogative in a country where traditionalists and liberals are bitterly divided.

“I promise I won’t disappoint you,” he added, thanking his wife Agata and daughter Kinga and the conservative government which backed him in the presidential race.

The Polish presidential election was originally scheduled for May 10, but failed to go ahead amid the COVID-19 pandemic.

Edited from TheNews.pl and Kath.net