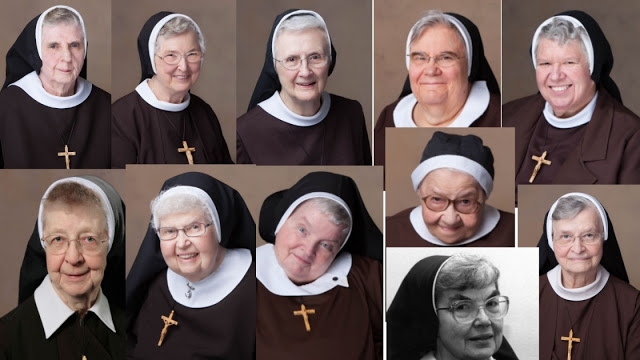 Catholic News World originally brought you this sad story in May. However, CNS and NCR now report that 3 more religious sisters from the Order of the Felicians have died. Sister Mary Madeleine Dolan, 82, died May 10 and Sister Mary Danatha Suchyta, 98, one of the sisters thought to have survived the illness, died from its effects June 27. Also, Sr. Mary Ramona (Florence) Borkowski, 93, Lodi, New Jersey (April 18). May they Rest in Peace.May their souls and the souls of all the faithful departed, through the mercy of God, rest in peace.

The Felician Sisters’ community in Livonia, Michigan, lost 13 sisters to COVID-19 (the 14th was a Felician in New Jersey). This community is home to 44 Felician sisters and five members of other congregations who are students at nearby Madonna University. In addition to the 13 Sisters who died in Michigan, another 17 were infected but have recovered.
Original Post from early May:


One convent of Felician Sisters saw the Deaths of 11 of their Sisters during the month of April while the Coronavirus Pandemic was spreading. At least five of their deaths were linked to COVID-19. The other deaths are not yet confirmed to have been linked.
These Sisters belonged to a convent which was started 80 years ago. They served all groups of people in education, and in care for the sick. They were also devoted to the poor.

Sister Mary Martinez (Virginia) Rozek, 87
Sister Mary Martinez (Virginia) Rozek taught elementary, middle and high school at several schools in Detroit and, with a degree in French, also taught foreign languages at Madonna. She was principal at schools in Garden City, Detroit and Hamtramck, as well as in Pomona, California.
She died on April 28.
Edited from Michigan Health Watch - www.bridgemi.com
and www.feliciansistersna.org/