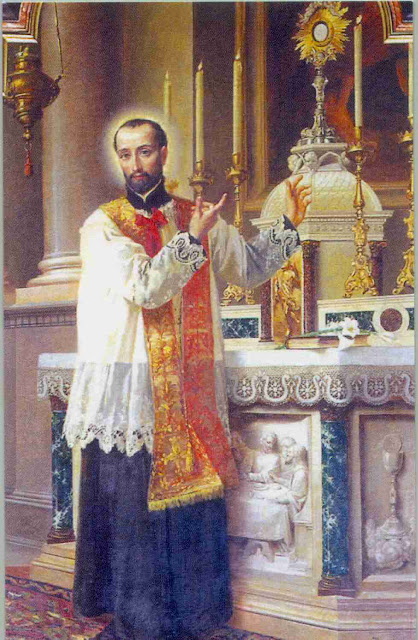 Founder of the Clerks Regular of St. Paul, commonly known as the Barnabites; b. in Cremona, Italy, 1502; d. 5 July, 1539. While he was still an infant his father died, leaving the care of the child's education to his mother, who taught him compassion for the poor and suffering by making him her almoner. After completing the studies given in the schools at Cremona he was sent to Padua for his philosophy, and in 1520, when he had finished this course, began the study of medicine in the university at that place. At the age of twenty-two he received his degree of Doctor of Medicine and returned to Cremona to practise his profession. Three years later he began to study theology and received holy orders in 1528.
He now devoted himself with renewed energy to works of charity and mercy, visiting and consoling the sick in hospitals and poor-prisons. The ministry of preaching and the administration of the sacraments produced such great fruit that St. Antonio was encouraged to seek a larger field for his labours and to carry out a great project which he hard formed for the good of souls. He went to the populous city of Milan, of which he was a burgess, and entered the Confraternity of Eternal Wisdom. Among the members of this religious body he allied himself with two priests, Fathers Ferrari and Morigia, and told them of his idea of founding a congregation of secular clergy. Northern Italy at this period was in a deplorable condition.
Frequent wars had devastated the country. The advent of the Lutheran soldiery and their contempt for everything Catholic had spread the contagion of bad example, while famine and plague followed in the track of the soldiers. These scourges combined to produce a state of misery that appealed most powerfully to Antonio and his associates. "The Congregation of the Regular Clerks of St. Paul", St. Antonio's work, which began with five members, was canonically sanctioned by Pope Clement VII in 1533. Their rule bound them to "regenerate and revive the love of the Divine worship, and a truly Christian way of life by frequent preaching and the faithful administration of the sacraments." The first superior of the new congregation was St. Antonio, who soon became known in Milan as an apostle. Besides giving conferences in churches to ecclesiastics and lay people, he went into the streets of the city with crucifix in hand, and produced great fruit in souls by preaching on the Passion and Death of Christ and the need of penance for sin. In 1536 he resigned the superiorship to Father Morigia and later went to Vicenza at the request of Cardinal Ridolfi. There he succeeded in reforming morals and in bringing two religious communities of women to a stricter observance of their rule. In the latter labour he was greatly aided by a congregation of nuns "The Angelicals of St. Paul", which he had founded in Milan. He introduced, also, the devotion of the "Forty Hours' Prayers", in Vicenza. The last two years of his life were spent in Milan. He sought there a more suitable church for his Congregation and accepted the offer of the church of S. Barnabas, but died before the affair was arranged. From this church of St. Barnabas, the Congregation received the name by which its members are commonly known, i.e. Barnabites. Worn out by his voluntary penances, as well as by his untiring labours of charity, he was attacked by fever during one of his mission. Knowing that this illness was his last, he had himself brought to his native city, Cremona. There, in his mother's house, he received the last sacraments and peacefully expired at the early age of thirty-seven. His body was found incorrupt 27 years after his death. He was declared Blessed by Pope Pius IX in 1849. (See BARNABITES.) On 15 May, 1897, he was solemnly canonized in St. Peter's, Rome, by Pope Leo XIII. His writings are: "Detti notabili, raccolti da varii autori" (Venice, 1583); "Constitutiones ordinis clericorum regularium" (not published); "Sermones super praeceptis Decalogi" (not published).
Text shared from the Catholic Encyclopedia
Posted by Jesus Caritas Est at 10:24 PM