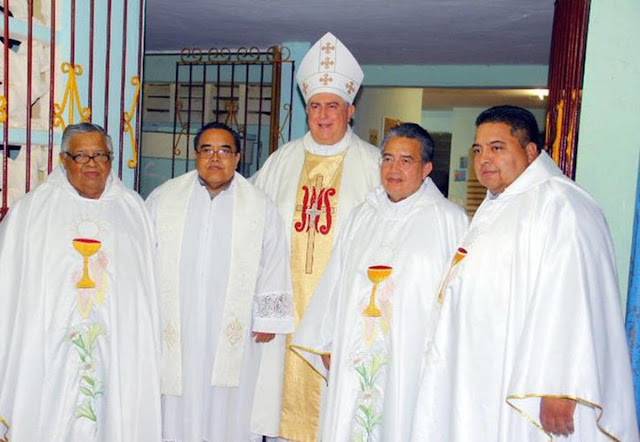 The parish priest of Santiago de María, Ricardo Antonio Cortez, was murdered and his body was found on the Litoral highway, jurisdiction of San Vicente.


According to the first investigations, the priest was heading towards Santiago de María, in Usulután, where he was director and professor of philosophy at the local seminary.
He was the rector of the Major Seminary, of Santiago de María, of the Diocese of Zacatecoluca, La Paz.

The crime occurred during the early hours of this Friday morning, authorities said.

According to Father Felipe López, priest of the Zacatecoluca cathedral, his friend traveled from Olocuilta to Santiago de María where he served as director and professor of philosophy at the seminary in that town.


The religious was vicar of the Parish of the Candelaria canton and was rector major of the seminary of Santiago de María.
"When we arrived at the place, we actually found the vehicle belonging to the Zacatecoluca diocese and about three meters behind the vehicle a lifeless body that had bullet wounds," explained a police source.


"Apparently the priest was intercepted and then forced to get out of the vehicle, which had been assigned to him by the church, to shoot him, later the body was dragged until it was left in the brush on the side of the road," said an agent of the Policeman.


Father Ricardo Antonio Cortez had almost 20 years of dedicating himself to priestly life in the country.

"He was one of the most active and prepared priests that we had in the entire La Paz area," Father López said.


"He went to study philosophy in Rome where he graduated, this earned him to be appointed as director of the seminary in Santiago de María and give classes there, it really is a great loss for us," said the father.

The murdered priest leaves sadness and a great void between his parishioners, friends and the 35 students who were under his charge at the seminary.
Edited from El Salvador. com and Vatican News
Posted by Jesus Caritas Est at 9:39 AM