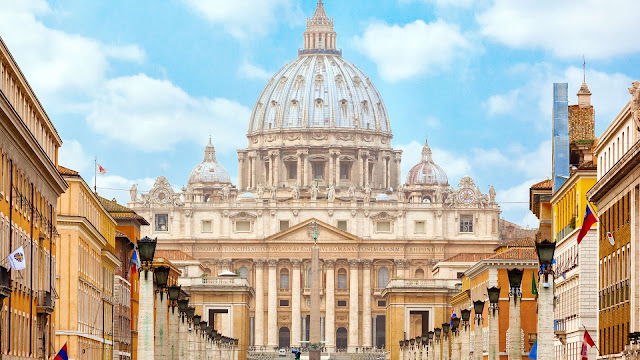 Vatican News report: Pope chooses six women as lay experts for Council for the Economy
Pope Francis appoints thirteen new Members to the Vatican’s Council for the Economy.
Pope Francis created the Council for the Economy on 24 February 2014, with the Apostolic Letter Fidelis dispensator et prudens.
The Council’s task is to supervise the economic management of the structures, along with the administrative and financial activities, of the Dicasteries of the Roman Curia, as well as the Institutions connected with the Holy See and Vatican City State.
The Council is composed of fifteen Members, eight of whom are chosen from among Cardinals and Bishops, so as to reflect the universality of the Church. The other seven are experts of various nationalities, with financial expertise and recognized professional credentials.
Cardinal Reinhard Marx, Archbishop of Munich and Freising, will remain as coordinator of the Council for the Economy. Cardinal Wilfrid Foix Napier, Archbishop of Durban, will also stay on as a Member until his 80th birthday.
New members
On Thursday, Pope Francis appointed the following Cardinals: Péter Erdő, Archbishop of Esztergom-Budapest; Odilo Pedro Scherer, Archbishop of São Paulo; Gérald Cyprien Lacroix, Archbishop of Québec; Joseph William Tobin, Archbishop of Newark; Anders Arborelius, Bishop of Stockholm; and Giuseppe Petrocchi, Archbishop of L'Aquila.
He also appointed the following lay people to the Council: Charlotte Kreuter-Kirchhof, Eva Castillo Sanz, Leslie Jane Ferrar, Marija Kolak, Alberto Minali, María Concepción Osákar Garaicoechea, and Ruth Maria Kelly.
Brief biographies of the lay Members:
Prof. Dr. Charlotte Kreuter-Kirchhof (Germany)
Studied Law at the University of Heidelberg, Genf and Tubingen. Since 2016 Professor of German and Foreign Public Law, International and European Law in the Faculty of Jurisprudence, Heinrich-Heine University Dusseldorf. Chairperson of the Hildegaris Association, a movement of Catholic women in Germany supporting female students in need.
Dr. Marija Kolak (Germany)
Has had a distinguished career with the Berliner Volksbank in which she held various positions. Took the Advanced Management Program at the Harvard Business School, Boston USA, and is presently President of the Bundesverbandes der Deutschen Volksbanken und Raiffisenbanken, Berlin. Is married with three children.
Maria Concepcion Osacar Garaicoechea (Spain)
Born in Lecaroz, Navarra, Spain, she is the founding partner of the Azora Group and President of the Board of Azora Capital and Azora Gestion, SGIIC. Azora is an independent inveestment manager based in Spain, specializing on real assets and energy. Trustee of the ICO Foundation (Official credit Institute), member of the Governing Board of APD (Association of management progress). Member of the Advisory Board of Think Tank Institucion Futuro. Previously Vice President of Santander Central Hispanico Activos Immobiliarios and President of Banif Immobiliaria as well as President of INVERCO (Association of Collective Investment Institutions and Pension Funds) and a member of the Board of Banca Civica. She has a degree in law from the University Autonoma de Madrid, an MBA from IE and PDG IESE fromn the University of Navarra. Married with two daughters.
Eva Castillo Sanz (Spain)
Obtained a Degree in Law and Business Studies from the Pontifical University of Comillas (E-3) in Madrid, Spain Currently sits on the Board of Directors of Bankia S.A; the Board of Directors of Zardoya Otis S.A; and the Board of Trustees of Fundación Comillas-ICAI and Fundación Entreculturas. Previously served in the following positions: member of the Board of Directors of Telefónica, S.A; President of the Supervisory Board of Telefónica Deutschland Holding, AG; member of the Board of Trustees of Fundación Telefónica; President and CEO of Telefónica Europa; member of the Executive Committee of Telefónica, S.A; and President of the Supervisory Board of Telefónica Czech Republic, a.s. Acted as Independent Director of Visa Europe Limited and Old Mutual, Plc., as well as Director of Merrill Lynch Private Banking for Europe, the Middle East, and Africa (EMEA); and President of Merrill Lynch Spain and Portugal.
Ruth Mary Kelly (Great Britain)
She served in the Labour Government between 2004-2008 as the Secretary of State for Education and then joined HSBC Global Asset Management as Global Head of Client Strategy. She presently holds the position of Pro Vice Chancellor for Research and Enterprise at St. Mary’s University, Twickenham in south-west London.
Lesile Jane Ferrar (Great Britain)
A Commander of the Royal Victorian Order, she was Treasurer to Charles, Prince of Wales, from January 2015 until July 2017. She was educated at Harvard Business School and the University of Durham. On leaving the Royal Household she has taken on a number of Non-Executive and Trustee roles.
Alberto Minali (Italy)
Born in Verona in 1965 with a Laurea from the Bocconi in Political Economy, as well as specializing at the University of Yale and Brandeis University, Boston. Has held the position of Director General and Chief Investment Financial Officer of the ‘Gruppo Generali’ and Chief Investment Officer of the Eurizon Group. Former CEO of the Gruppo Cattolica Assicurazioni.
FULL TEXT Source: Vatican News