Wow Conversion Story of Catholic Priest in Lebanon “I met Jesus when I was a little Muslim boy, sitting in at Mass." 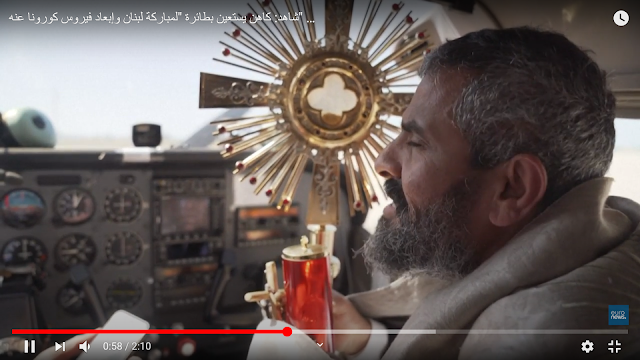 ACN Release: FATHER MAJDI ALLAWI is a Lebanese Maronite priest who converted from Shia Islam to Catholicism. On August 15, 1981, Feast of the Assumption, he was baptized. He was ordained a priest April 10, 2005.

He is the founder of Bonheur du Ciel (Heaven’s Joy), a non-profit based in Beirut that helps young men with drug addictions, girls who have suffered sexual assaults and the poor. He also opened the first restaurant to serve Lebanon’s poor in the city of Bourj Hammoud. He recently spoke with Aid to the Church in Need about his journey of faith:

“I met Jesus when I was a little Muslim boy, sitting in at Mass. I also met him through the Bible, the biggest school of love. I became attached to his soul and his heart and I was very curious to learn more about him.


Father Allawi
“At age 9, I started listening during the catechism hour at a Maronite school ; I remember cleaning classrooms and hiding under desks so I could listen to the catechism teachers. As a Shiite Muslim, I could not attend catechism classes, but I waited every week for this class; it was like waiting for the most precious thing that could happen to me.

“At age 11, I asked my parents to get baptized because I was fully in love with Jesus and his mercy. They completely rejected the idea since I came from a devout Muslim family and my uncle was a religious authority. I left my parents’ house and spent many nights on the beach. I used to go to a small church in Jbeil, Saydit al Fakir, Our Lady of the Poor, and listen to the Mass through the church’s window. I will never forget the love and the light that flowed out from this window.

“After staying far from them for a while, my parents allowed me to get baptized. It would be another three years before I took First Communion. In that time, it was very hard being in church and seeing everyone receiving Jesus’ body and blood and not being able to do so myself. I finally received this blessing at age 14.

“After my conversion, I faced a lot of criticism, but I did not care. I practiced the faith in secret. I realized that God lives in the heart of every believer who aims to spread love and peace. I knew that my path was risky, but it was worthwhile. Eventually, I felt called to become a priest.

I founded Bonheur de Vie to help the poor and needy; I cooperated with various authorities to provide medicine for those who could not afford treatment. I worked with social institutions to take care of prisoners, and I recruited psychiatrists and psychologists to help young drug addicts as well as girls who have been victims of sexual harassment.

“I see Jesus in every human being. If we only knew who we are serving—Jesus, who lives in every human being—then we would kneel while we are serving the poor or helping the sick. I respect all human beings, regardless of race, color, or beliefs. Hunger and poverty have no name, no color and no religion. How can you see a human being hungry and go back home, sit and eat, knowing that someone is still hungry and cold out on the road? And I’m being attacked for helping people of all faiths. But aren’t they all human beings? Should I tell them to convert to Christianity before helping them?

“There is nothing greater than a person sacrificing himself to save humanity from sin. Jesus Christ demonstrated his love to people while he was on the cross—he accepted pain to teach people that sacrifice is the symbol of love and he died to prove to them that after death there is resurrection, that there is always hope. What we need in this world is love and when we have true love, which we receive through the Holy Spirit, then we will know endless love.

“I have fought all my life for human rights. That is why Bonheur du Ciel is my priority: I long for a fair, merciful future, without poverty. My dream now is to establish a free Catholic school for children without identification papers, those who are abandoned, or who are children of refugees. I believe that if you have Jesus in your heart, you can do whatever you set your mind to, regardless of the obstacles you face.”