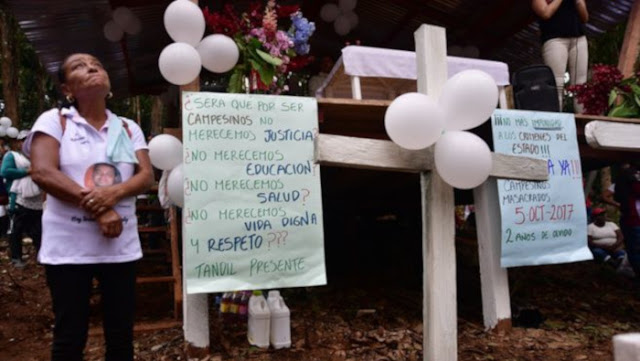 AMERICA/COLOMBIA - Consternation of the Bishops after the latest massacres: "enough with this mechanism of death"
Tuesday, 22 September 2020

Bogotà (Agenzia Fides) - After the new massacres of six young people in the rural area of the municipality of Buenos Aires (Cauca) and four other people in the municipalities of Mosquera and El Charco (Nariño), which also caused injuries and destruction, the Catholic bishops, "with deep sorrow for the death of these brothers, pray for their eternal rest and express solidarity with their loved ones, with the municipal communities to which they belonged, the archdiocese of Popayán and the diocese of Tumaco", asking the Lord for their speedy recovery of the wounded.
In the statement released by the Episcopal Conference, sent to Fides, the Bishops say they are torn apart by the long list of assassinations and attacks, in different contexts and places in the country, which have occurred in recent months: "the attacks against life and dignity are more atrocious each time, and have increasingly serious humanitarian consequences for the whole nation".
Faced with this serious situation, on the day we celebrate the International Day of Peace announced by the UN, September 21, the Colombian Bishops reiterate that "human life is sacred and attacking it is a very serious crime", "no peace can be reached if life is not defended". Therefore, to all those who continue to promote violence, they ask to "definitively put an end to this mechanism of death". They invite the Colombian people to assume "a clear and courageous commitment to the defense of life", as it is a task that requires the participation of all: governmental bodies, public and private institutions, civil society and families. "We ask the competent authorities to strengthen the protection measures for the affected communities and to proceed diligently in investigating and bringing to justice those responsible for the massacres".
The Bishops' statement concludes by exhorting initiatives of solidarity and support for communities suffering from the consequences of violence, and inviting Catholic communities to "persevere in prayer for peace, and to continue to promoting initiatives that lead to reconciliation and defense of life, as the primary and fundamental right of all people". (SL) (FULL TEXT Agenzia Fides, 22/9/2020) Image source: Telesur - Google Images