#BreakingNews over 3000 People at the Pro-Life March for Life in Berlin, Germany with Many Youth, Families, Bishops and Religious 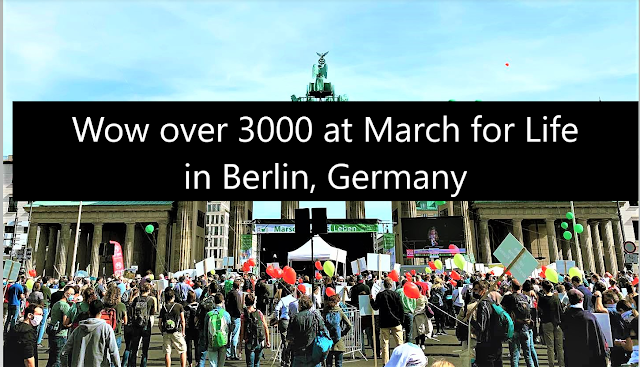 According to the organizers, more than 3,000 demonstrators protested against abortion and active euthanasia on Saturday at the 16th "March for Life" in the center of Berlin, Germany. The organizer was the Bundesverband Lebensrecht (BVL), an association of twelve organizations. According to police, the number of participants was "in the lower four-digit range".

Because of the Corona virus, the organizers estimated that there were fewer participants than in 2019, when they counted more than 8,000 participants from all over Germany. For this reason, the rally was broadcast live on the Internet and elsewhere. During the event, masks were compulsory; participants were urged to keep their distance.
Germany's largest rally for the protection of life

Regardless of this, the annual march is, according to BVL, the largest rally for the protection of life in Germany. Against it there were again protest meetings, which were supported among other things by SPD, leftists and Greens. According to police estimates, they had up to 1,000 participants, who demanded, for example, an unrestricted access to abortion. The police deployed around 900 officers to secure both rallies.

At the start in front of the Brandenburg Gate, the participants of the march agreed to demands formulated by the BVL by applause. They turned against euthanasia and assisted suicide as well as against pre-implantation diagnostics and prenatal blood tests. Instead, the Embryo Protection Act must be retained. They also condemned surrogacy and a "further legalization and trivialization of abortion. They also opposed "the use of cells from aborted children in the production of vaccines.

Among the participants were the Catholic bishops Wolfgang Ipolt (Görlitz) and Rudolf Voderholzer (Regensburg) as well as Auxiliary Bishop Florian Wörner (Augsburg). Protestant bishops did not take part in the march.

Koch: Right to life "from the first moment in the womb to the last breath

The closing service was held by the Archbishop of Berlin, Heiner Koch. In his sermon he emphasized the right to life of every human being "from the first moment in the womb to the last breath". Whoever disregards this, can see from history what consequences it has.

Before the silent march over a distance of three kilometers, former Bundestag Vice President Johannes Singhammer praised the life protection movement as a "great citizens' initiative". It does not condemn women in need, but wants to help them. The CSU politician stressed that the protection of creation should "not exclude unborn life".

The former head of the evangelization movement ProChrist, Ulrich Parzany, evaluated the decision of the Federal Constitutional Court in February that a ban on business-like suicide assistance violates the Basic Law as a "dam burst". In addition, he criticized Hannover's Protestant regional bishop Ralf Meister, who had pleaded for a right to suicide and also considers corresponding assistance to suicide in church institutions to be permissible.
Edited from KNA