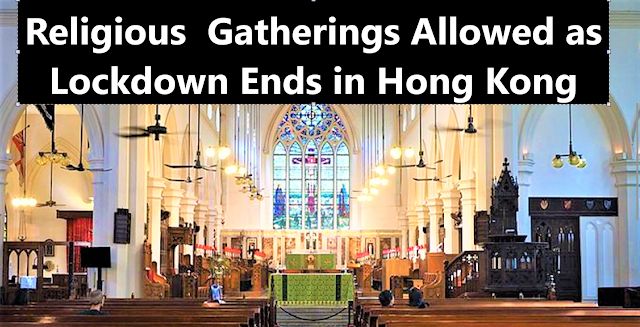 Asia News IT reports that religious gatherings allowed after lockdown lifted.
by Paul Wang
The government is allowing religious and sporting gatherings. Some restrictions remain in place until 8 October. So far, Hong Kong has reported 5,079 cases with 105 deaths.


Hong Kong (AsiaNews) – "Let's begin again!" said a missionary from the Pontifical Institute for Foreign Missions (PIME), after the diocese announced that public Masses can be celebrated again, starting next Friday, after months of lockdown.

The Chancery Office of the Diocese of Hong Kong sent a notice to its priests a few hours after local authorities lifted the ban on “group gatherings”, including those by religious groups and sporting organisations. This follows a significant drop in COVID-19 cases.

Since 15 September, no local cases have been reported. However, certain requirements remain in place until 8 October, such a wearing masks in public, both indoors and outdoors; keeping social distance in restaurants; and no groups of more than four people.

The guidelines of the Diocese of Hong Kong follow government regulations: Congregations in churches must be limited to 50 per cent of the buildings’ normal capacity; and worshippers entering churches must wear a mask, cleanse their hands with a sanitiser; and have their body temperature taken.

Since the number of worshippers will be reduced to maintain social distancing, the diocese suggests adding one or two masses to allow more people to take part in the services.