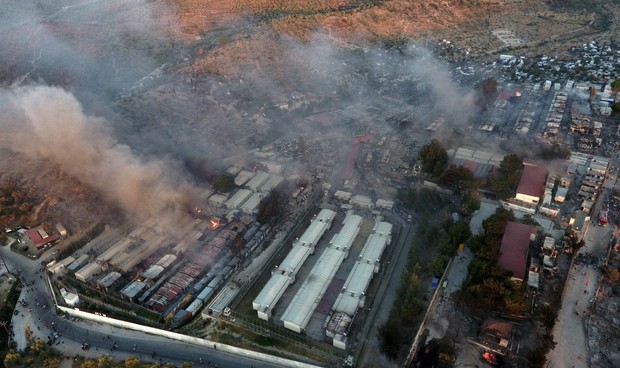 EUROPE/GREECE - "Europe should not be blind and deaf": appeals after the fire at Moria refugee camp
Thursday, 10 September

Rome (Agenzia Fides) - "The fire at Moria refugee camp, in Lesbos, confirms once again that the States of all of Europe cannot be blind to a crisis dictated by wanting to turn their backs on those who ask for help. We cannot be deaf to people who are living far beyond survival threshold. That of the migrants of Moria is a 'non-life' because they are in inhuman conditions, as if they were 'detained' for the crime of hope". This was stated in a note sent to Fides, by Sister Neusa de Fatima Mariano, superior general of the Scalabrinian Missionaries, a congregation that since its foundation has dealt with assistance to migrants. "We join once again to the many appeals of Pope Francis to find a Christian solution, capable of giving the many refugees, faces of Christ, the possibility to truly live in a just, equitable world that can allow them to feel safe", concludes Sister Neusa.
The fire broke out on the evening of 8 September in several points of the structure, which at the time was hosting over 12,000 asylum seekers (four times its capacity) and is the largest in Europe. After 24 hours, a new fire devastated the part of the refugee camp that had been spared, further panicking the families, forced to flee to safety as their tents burned. The Scalabrinian Sisters are committed to the mission in Lesbos (see Fides, 29/7/2020; 27/8/2020), where in collaboration with the Community of Sant'Egidio, since the end of July have been providing assistance to refugees arriving on the Greek island.
After the fire, the Community of Sant’Egidio also launched an appeal to all the countries of the European Union to urgently welcome refugees who have lost everything. "These are asylum seekers who for months, some for years, have been living in conditions of extreme precariousness, after having made long and very risky journeys to escape from wars or unsustainable situations, mostly from Afghanistan - underlines the note sent to Fides -. They are mostly families, for an overall figure of about 13,000, with a percentage of minors of 40 percent. If Europe still lives up to its tradition of civilization and humanity, it must take it upon itself with an act of collective responsibility". (SL) (Agenzia Fides, 10/9/2020)
Posted by Jesus Caritas Est at 9:08 AM