Fr. Ron Foshage, MS of the Diocese of Beaumont Wins Lumen Christi Award for his Work against Racism 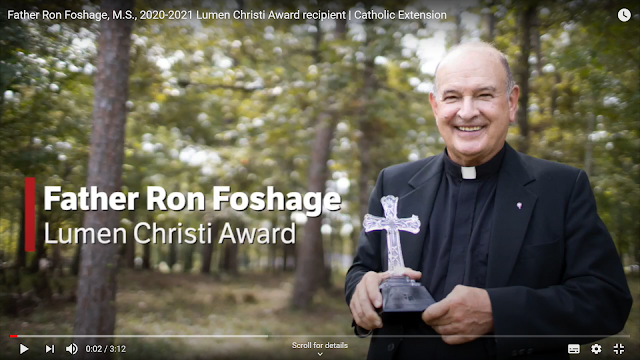 In this challenging year—in a country suffering from a pandemic, natural disasters, reckoning with its past and current struggles with systemic racism, and enduring ceaseless political battles in a landmark election year—it can be difficult to see the valiant efforts of everyday people working to make a difference.
Catholic Extension celebrated the remarkable work of  47 nominees and eight outstanding finalists, including Fr. Foshage. Each is a reflection of the “Lumen Christi” or “Light of Christ.”
Fr. Foshage leads five Catholic Extension-supported parishes in the Diocese of Beaumont, including St. Michael Parish in Jasper. He showcases how gestures both grand and small, in the most difficult of times, can create an immense impact.
According to Catholic Extension, Father Foshage has traversed the country as a leading voice against racism and hate crimes. In 1999, he spearheaded the dismantling of a 163-year-old fence that separated Black and white graves in the city cemetery. Later that year, the U.S. Department of Justice honored his work to improve race relations.
Father Foshage’s testimony before legislators helped to bring about the James Byrd Jr. Hate Crimes Prevention Act, which became federal law in 2009 as the Matthew Shepard and James Byrd Jr. Hate Crimes Prevention Act. In January of this year, he was named Jasper’s “Citizen of the Year.”
It’s not all that unusual that Father Foshage found himself in the center of rebuilding a community torn apart by what occurred in Jasper that terrible night.
The religious congregation of missionary priests and brothers to which Fr. Foshage belongs has a special “charism” of reconciliation. This means that wherever they are called to serve in the world, they act as facilitators and promoters of reconciliation through their ministry.
Father Foshage admits, “I never thought I would be called to live it out in such a visible way.”
Read more about Fr. Foshage: https://www.catholicextension.org/stories/texas-priest-forges-a-path-for-reconciliation/

Catholic Extension's Lumen Christi Award honors an individual or group working in one of America's mission dioceses who demonstrates how the power of faith can transform lives and communities. Lumen Christi recipients are the hidden heroes in our midst. They bring light and hope to the forgotten corners of our country and inspire those around them to be the "Light of Christ" as well.

Past recipients of the Lumen Christi Award, which is Latin for “Light of Christ,” have included priests, women religious, and lay leaders from across the nation.

Source: https://www.catholicextension.org/
Posted by Jesus Caritas Est at 11:04 AM