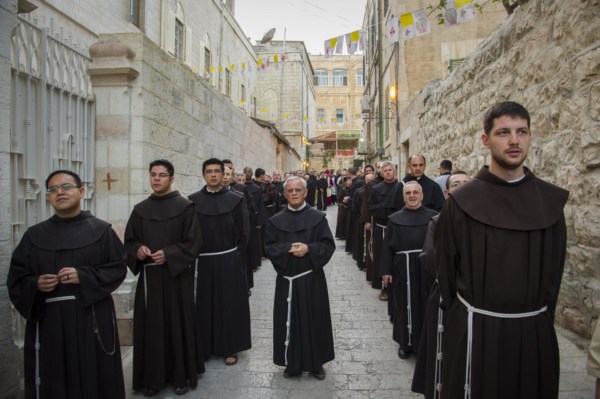 Aleppo (Agenzia Fides) - The former "Holy Land College" of Aleppo, historic stronghold of the Custody of the Holy Land in the northern Syrian metropolis, has been officially returned by the Syrian State to the Franciscan Fathers of the Province of Sao Paulo. This was reported by Father Firas Lutfi ofm, Custos of the Province of São Paulo for the Franciscans of Syria, Lebanon and Jordan, in a letter released and also published on the Facebook account by the Catholic parish of the Latin rite of Aleppo.
In the letter, which bears the date of September 8, the complex is described as a place "which played an important role since its foundation as a secondary school", a school where "many doctors, engineers, State personalities and civil society received their school diploma". When the schools were nationalized by the Syrian regime - continues Father Firas - the 'Holy Land College' continued to represent an important place for the Christian presence in Aleppo, thanks above all to the activities carried out by the "Christian Educational Center". "Since the beginning of the abominable crisis that has afflicted our beloved Country", adds Father Firas, "the Franciscans have welcomed families in their mission in desperate need of a hospitable place that would offer a little stability and hope in their land and their cultural heritage. Hundreds of children from Aleppo flocked to the monastery every day, which became day after day an oasis of love, encounters and peace".
Now, thanks to the "long awaited gift" received "from the hands of the Virgin Mary" - the letter reads - the Franciscans will be able to carry out their mission more effectively at the service of the Syrian people afflicted "by war, epidemics and tribulations of all kinds". In his letter, the Franciscan Father also asks "God to bestow all his graces on His Excellency President Bashar Hafez al Assad, because he has honored us with this gift dear to all our hearts".
In the meeting with President Bashar Assad on 23 December 2019 (see photo), the Franciscan fathers, as reported by Ora pro Syria, asked to recover the land and the structure of the 'Holy Land' that belonged to the Order, and he guaranteed them "his interest".
Currently there are 15 Franciscans present in Syria. The parishes in the villages of Knayeh and Jacoubieh, in the Orontes valley, are active thanks to the pastoral service guaranteed by them, despite being in territories occupied by jihadist militias. Recently, in Syria, two Franciscans - Father Edward Tamer, 83, and Father Firas Hejazin, 49 - died due Covid-19. (GV) (Full Text Source- Agenzia Fides, 17/9/2020)

Posted by Jesus Caritas Est at 8:27 AM