Pro-Life March for Life Announces Theme "Together Strong: Life Unites" and Says "We will march again this year,” - Join the March! 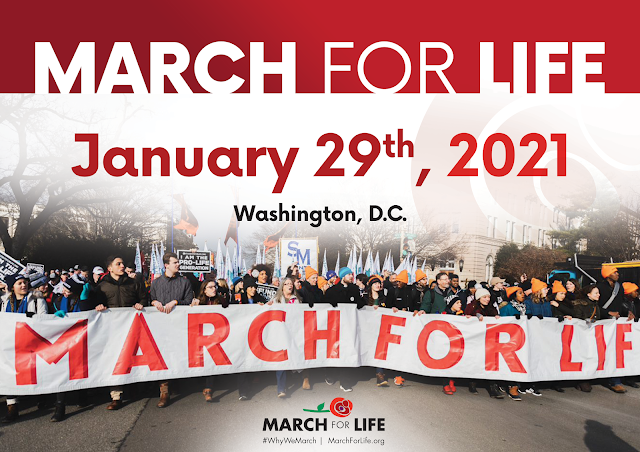 In the United States, hundreds of thousands of pro-lifers come together yearly for the March for Life in Washington, DC, to oppose abortion.

This year due to COVID-19, participants wear masks and keep a distance from one another.

March for Life held a virtual event announcing a unity and diversity theme for the event to support the right to life of of unborn babies. Their theme was announced as 2021 March for Life: Together Strong: Life Unites.


Jeanne Mancini, President of March for Life, was joined by a different of leaders from various organizations across the nation to announce this theme.  Each person has critical role to play in building a culture of life. The diversity of unique gifts and talents is truly the strength of the pro-life movement.

“People from all different walks of life, faiths, colors, and backgrounds are united in the belief that life has inherent human dignity,” said Jeanne Mancini, President of March for Life. “This year’s theme highlights diversity as the true strength of the pro-life movement and how our commitment to life has the power to unify. The world today is divided, but the pro-life movement is working for the day that abortion, one of the most fundamentally divisive acts, becomes unthinkable.”

The March for Life also announced that Matthew West, the GMA Dove Award®-winning and GRAMMY Award®-nominated artist/songwriter, will be performing at this year’s March for Life Rally. Matthew West’s music has inspired and united people from around the world. Matthew West explained, “I am honored to be performing at the March for Life. This is an important event and I look forward to proudly lifting my voice along with thousands of people from all walks of life as we gather together in Washington D.C. and send this message loud and clear: I believe every life deserves a voice. Every child deserves a chance.”
Image Source: https://marchforlife.org/
With Text Edited from Life News and March for Life's Facebook Page - https://www.facebook.com/marchforlife