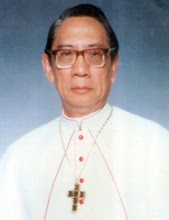 Tributes poured in for a “courageous prophet” who braved threats and harassment in fighting the social ills in the country.

Archbishop Oscar Cruz did not aim to overhaul society when he embarked a crusade against gambling in early 2000. His goal was to awaken the people to their exploitation by the gambling lords and their protectors in government.

Those who knew him have nothing but praises after he died in a hospital due to complications from the coronavirus disease on Aug. 26.

Archbishop Socrates Villegas of Lingayen-Dagupan said his predecessor was “a faithful shepherd” and “a patriot and pastor”.

“The world is poorer by his passing away. Heaven has a new jewel. My tears flow. My heart is grateful that in this lifetime I met a great churchman like Archbishop Oscar Cruz,” he said.

Bishop Pablo Virgilio David, the acting president of the bishops’ conference, described the archbishop as one of the leading canon lawyers in the Philippine Church.

According to him, Cruz took an active part in convening the historic Second Plenary Council of the Philippines in 1991.

“He has also been one of the leading voices in the advocacy against illegal gambling in the country,” David said.

Senator Panfilo Lacson, who helped Cruz in his campaign against illegal gambling called “jueteng”, also mourned the passing of the 85-year-old archbishop.

“He was such a dear friend who loved our country next to God,” he said. “God is in good company.”


The cremated remains of Archbishop Oscar Cruz arrive at the St. John the Evangelist Cathedral in Dagupan City, on Wednesday evening. He will be interred at the Santuario de San Juan Evangelista following a funeral Mass at the cathedral on Aug. 28. GLEN MUNOZ LOPEZ

Labor group Federation of Free Workers also paid tribute for the archbishop, whose “prophetic voice against abuses and spared no sitting presidents.”

Cruz was just a priest for 14 years when he became auxiliary bishop of the Archdiocese of Manila in 1976. Two years later, he was elevated to archbishop of San Fernando, a post he served until 1988.

After his stint as secretary-general of the Second Plenary Council of the Philippines, he was named archbishop of the Archdiocese of Lingayen-Dagupan in 1991, a post served for 18 years until his retirement in 2009.

In 1993 he was elected Secretary General of the Federation of Asian Bishops Confereces, a post he held until 1996.

The archbishop headed the Catholic Bishops’ Conference of the Philippines for two terms, from 1995 to 1999.

In a landmark Pastoral Exhortation on Philippine Politics issued 1998, Cruz stressed the urgent need for Christians and as Church “to evangelize politics, to become involved in politics in the way of the Gospel”.

An author of at least 54 books, Cruz is also the country’s first blogging bishop, which he started way back in 2004.

However, he stopped blogging in November 2017 after he suffered from acute pneumonia that weakened him.

In one of his last blogs, the archbishop echoed the CBCP’s call for the country’s “healing” amidst the spate of killings and human rights abuses as a result of the government’s war on drugs.

“Lord, heal our land because the latter is wounded, it is bleeding, it is suffering,” he wrote.
Source- CBCP News
Posted by Jesus Caritas Est at 12:35 PM