RIP Cardinal Marian Jaworski at 94 - Death of Friend of St. Pope JP II who also Anointed the Pontiff when Dying 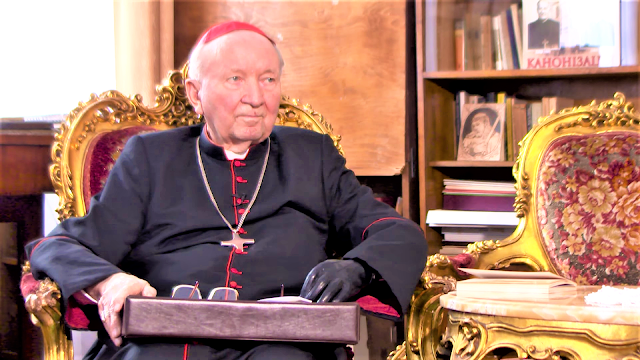 The Ukrainian Cardinal Marian Jaworski died on September 5, 2020 in Krakow at the age of 94. The Cardinal anointed the late pontiff St John Paul II and was his friend.
Biography from Vatican.va:
Cardinal Marian Jaworski, Archbishop emeriturs of Lviv for Latins, Ukraine, was born on 21 August 1926 in Lwów, Poland, today Lviv, Ukraine. He was ordained on 25 June 1950 and, after a year of pastoral work, continued his studies, earning doctorates in theology at the Theological Academy of Kraków and in philosophy at the Catholic University of Lublin.

On 21 May 1984 he was appointed titular Bishop of Lambaesis and Apostolic Administrator of Lubaczów, receiving episcopal ordination on 23 June.

On 16 January 1991 he was promoted to Archbishop of Lviv for Latins and served as President of the Ukrainian Episcopal Conference.

Created Cardinal and reserved "in pectore" by St. John Paul II in the consistory of 21 February 1998; proclaimed in the consistory of 21 February 2001, of the Title of S. Sisto (St. Sixtus).
Biography Source: https://press.vatican.va/content/salastampa/en/documentation/cardinali_biografie/cardinali_bio_jaworski_m.html
See: https://ekai.pl/ks-witold-j-kowalow-wspomina-kard-m-jaworskiego/ and https://diecezja.pl/aktualnosci/zmarl-kard-marian-jaworski/
Image Source: Youtube Screenshot - Google Images
Posted by Jesus Caritas Est at 1:21 PM