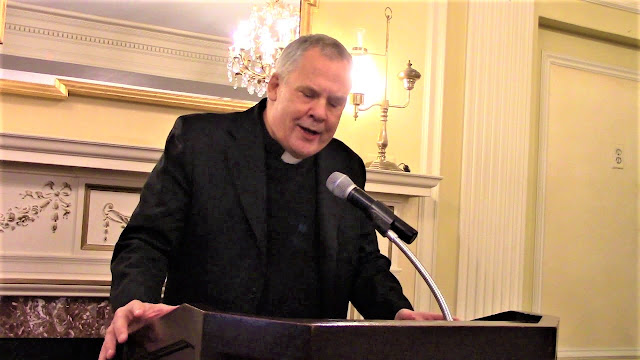 September 3, 2020 — Let us pray in thanksgiving for the life of Fr. Paul V. Mankowski, SJ, who died on September 3, 2020 in Evanston, Illinois. He was 66 years old. May he rest in peace. Father Mankowski died due to a brain hemorrhage caused by a ruptured brain aneurysm.

Paul was born on November 15, 1953, in South Bend, Indiana. Before entering the Society of Jesus, he earned an AB in classics and philosophy from the University of Chicago. Paul entered the Society on September 5, 1976, at Berkley, Michigan. He was ordained on June 13, 1987, and he professed final vows on December 12, 2012, in the Chapel of Ignatius House on the campus of Loyola University Chicago.

During regency, Paul studied at Oxford University (1979-1983) before teaching at Xavier University (1983-1984). After doctoral studies, Paul was a professor of Old Testament languages at the Pontifical Biblical Institute in Rome, Italy (1994-2009). He returned to the states, made tertianship, and taught at Christ the King Jesuit College Preparatory School (2010) and at Graham School of General Studies at the University of Chicago (2010-2011). Paul spent a year as acting pastor of Sacred Heart Church English Language Parish in Amman, Jordan, before, in 2012, becoming a Scholar-in-Residence at Lumen Christi Institute, University of Chicago.

Paul loved his college years at the University of Chicago where he deeply appreciated the "great books" classical approach to education. During some of those years, Paul worked in the nearby steel mills to help support himself. In the Society, Paul did the "PPE" program at Oxford: philosophy, politics and economics. These early years laid the foundation for Paul's lifelong devotion to learning, reading widely in theology, biblical studies, philosophy, and political thought. Paul was always knowledgeable about contemporary events in church, politics, and culture, and ready to offer his perspective when engaged on these subjects, always rooted in his devotion to tradition and orthodoxy. He was very devoted to his family, and he cherished Sunday dinners, frequently at the home of one his sisters, who was married to a college friend of Paul's. Paul was deeply devoted to the Mass and the sacraments. He was generous with his supply work to Calvert House, the Newman Center at the University of Chicago, various parishes, as well as for communities of women religious around the world.

Paul's years in Rome at Pontifical Biblical Institute found him teaching ancient biblical languages to eager students from around the world. At the same time, he regularly read widely in contemporary theology and was sought after by many important church leaders to offer his advice and perspective. Paul had firm opinions about things such as the most recent translations of the lectionary and Roman Missal which he regarded as improvements. From time to time, Paul would offer book reviews and articles to the noted review, First Things.

The past eight years when Paul was missioned to the Lumen Christi Institute, located amidst the University of Chicago, was a homecoming for Paul. His prodigious and wide-ranging intellect found a home there. Paul taught widely appreciated non-credit courses to undergraduates on a wide range of subjects in theology and the classics. Through Lumen Christi, Paul also offered regular "great books" seminars to accomplished professional men and women downtown in the "classics." For those going through RCIA at nearby Calvert House, Paul would offer supplementary sessions for those eager to deepen their knowledge of the faith. (With his customary understatement and tongue-in-cheek humor, Paul would describe these sessions as offering "vitamins" to the catechumens!) Paul was deeply loved and respected by the community of scholars involved in the Lumen Christi Institute, and his death will leave a huge void.

In Jesuit community, Paul was a quiet, but kind and caring presence for his brothers, and he was known for his quick wit and sense of humor. You could set your watch by his morning walks and prayer time. When men in formation would live at Woodlawn, Paul would offer to celebrate Mass for them. When needed, Paul would cook, clean, and care for the sick. Paul would not call attention to himself when he did these quiet acts of service. For all his tremendous intellectual and linguistic gifts, Paul wore them all lightly and was, deep down, a humble man who never forgot where he came from and who he belonged to and who he loved. While Paul had his theological, philosophical and political differences with many of his Jesuit brothers and—at times—superiors, Paul's deep love of the church, the Society of Jesus, and his Jesuit vocation was the bedrock of his life, as he was convinced that fidelity to this vocation was his way to salvation.

Information about the wake and funeral Mass will be forthcoming.

Posted by Jesus Caritas Est at 9:55 AM