On Saturday, September 26, 2020 over 50,000 people gathered  to for Franklin Graham’s Prayer March. The people came together in the  capitol  to pray for the nation. (Numbers Revised in this Post with New Statistics from Video Analysis)

Franklin Graham, son of the American evangelist preacher Billy Graham, announced the Prayer March on Aug. 8, on Twitter for a nation “in trouble.”

“The only hope for this country is God. It’s not Republicans or Democrats,” Graham said. “Only hope is God and if we as Christians don’t pray for God’s help, he may just let this country fail.” 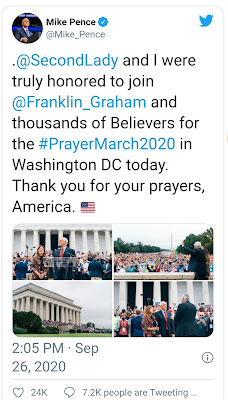 According to the Website tens of thousands of Christians gathered for prayer and reflected, and were led in part by Vice President Mike Pence.

VP Mike Pence said, “In these challenging times we do well as you do today to remember that in everything by prayer and petition with thanksgiving that we are to present our requests to God.”  “And we can claim the promise that the Peace of God that passes all understanding will guard our hearts and minds in Christ Jesus as His grace has through the generations of this nation.”


In 1952, Billy Graham called for a national day of prayer from the steps of the U.S. Capitol. On Saturday, thousands again filled the Capitol lawn, this time praying in unison. “None of us would be out here if we didn’t believe God answers prayer.” —Victor Santos
Anne Graham Lotz’s voice came over the crowd: “You have poured out your blessing on us, but God, we have not been faithful to you,” she prayed. “Would you hear? Would you forgive? Would you heal?”
Karen Brown  called it “empowering” to see so many unafraid to express their reliance on God—especially at a time Christians may feel like they’re standing alone in their faith. “I feel like there’s been an active effort to present division in our country,” she said. Meanwhile, she added, freedom of speech is getting “trampled on.”
When the Prayer March ended, thousands lingered at the Capitol, in no rush to get back to their homes, cars and hotels. Some clung to each other in prayer, just as millions around the country are clinging to God’s promise to heal, if only we will humble ourselves before Him.
“If my people who are called by my name humble themselves, and pray and seek my face and turn from their wicked ways, then I will hear from heaven and will forgive their sin and heal their land.” –2 Chronicles 7:14
The Prayer March paused at seven stops for focused prayer, led by various speakers. It began at the Lincoln Memorial, then moved to the WWII Memorial, Washington Monument, White House and National Museum of African American History and Culture, before heading to the National Archives and finishing at the U.S. Capitol.
Edited from : https://billygraham.org/story/tens-of-thousands-cry-out-to-god-at-prayer-march-2020/