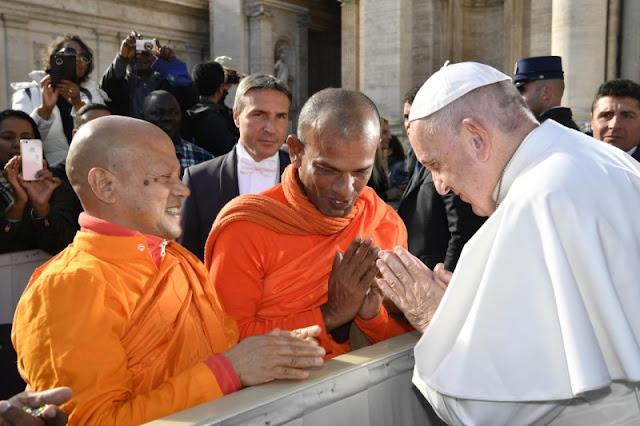 AUSTRALIAN CATHOLIC BISHOPS CONFERENCE - Press Release
Friendship and solidarity key themes in Pope Francis’ letter Media Release
October 4, 2020
A world that looks beyond a global pandemic with no roadmap can find one in Pope Francis’ new encyclical, which Archbishop Mark Coleridge says “is not just for believers but for the entire human family”. Published this evening, the Pope’s third encyclical is entitled Fratelli Tutti (Brothers and Sisters All) – words taken from St Francis of Assisi, who the Pope says has inspired what he writes. “It is a vision of the dignity of every human being from which flows the call to build a new culture of fraternity and dialogue,” said Archbishop Coleridge, president of the Australian Catholic Bishops Conference. “In his previous encyclical Laudato Si’ (Praise Be to You), Pope Francis spoke of care for our common home. Here he speaks of care for each other, the family that dwells together in the common home.” Pope Francis writes early in the encyclical: “It is my desire that, in this our time, by acknowledging the dignity of each human person, we can contribute to the rebirth of a universal aspiration to fraternity. “Let us dream, then, as a single human family, as fellow travellers sharing the same flesh, as children of the same earth which is our common home, each of us bringing the richness of his or her beliefs and convictions, each of us with his or her own voice, brothers and sisters all.” The Pope started work on the encyclical before COVID-19 struck. But he says that the need for local, national and international solidarity has become even more important now. The pandemic has created in many people a sense of the interdependence of communities and the fragility of human beings left to themselves. “Once this health crisis passes, our worst response would be to plunge even more deeply into feverish consumerism and new forms of egotistic self-preservation,” Pope Francis writes. “God willing, after all this, we will think no longer in terms of ‘them’ and ‘those’, but only ‘us’.” Archbishop Coleridge said the current divisions and conflicts all around are a road to nowhere. “The Holy Father speaks of ideologies that seek to divide rather than unite, policies that value certain people over others and economic systems that prioritise profit over people and the planet,” he explained. Archbishop Coleridge noted that many of those whom Pope Francis describes as often undervalued or treated inequitably – women, older people, unborn children, people who are trafficked, Indigenous peoples, people with disability, migrants and refugees – are similarly those left on the margin or cast aside in Australia. “In this country we may be tempted to think that the Pope is talking about elsewhere, but he’s not. True, he’s talking about the whole world – but he’s also talking about us,” the archbishop said. “Pope Francis offers a grand yet simple vision of human interconnectedness. We’re all connected to each other in ways we scarcely imagine. Our task now is to work out what this means in practice as we look beyond the pandemic. “In what he offers in this letter, the Pope can help with that. It’s impassioned yet tender, visionary yet practical, radical yet reasonable.” Read Fratelli Tutti and access other material at: www.catholic.org.au/fratellitutti
https://cathnews.com/media-releases/2376-201004-acbc-friendship-and-solidarity-key-themes-in-pope-francis-letter/file