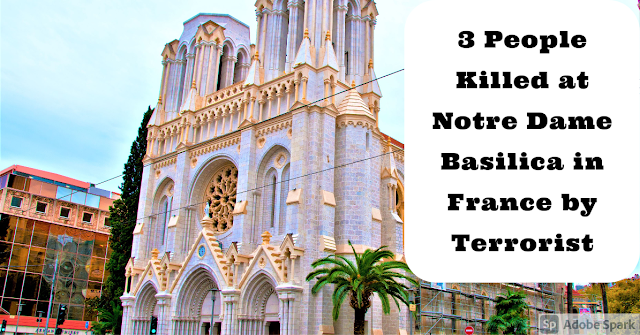 Three people, two women and a man, were killed and several more wounded in a knife attack carried out by a man, apparently a radical Islamist. The attack took place at Nice’s Notre Dame de L'Assomption Basilica around 9 am. First, a woman had her throat cut inside the basilica, and a man was fatally wounded. A third victim was killed in a bar in front of the basilica where she was hiding after fleeing the Church. The police arrested the attacker who was wounded. He is in hospital in very serious condition and he repeatedly shouted "Allahu Akhbar!" (God is greatest!).
Nice’s mayor, Christian Estrosi, said that this points to " to a "terrorist attack at the heart of the Notre-Dame basilica" by a supporter of “Islamofascism”. This is after a teacher was recently beheaded after showing cartoons of the prophet Mohammed in class.
Vatican News reported the Pope was informed of the situation and is close to the mourning Catholic community. He prays for the victims and their loved ones, so that the violence may cease, so that we may return to look upon ourselves as brothers and sisters and not as enemies, so that the beloved people of France, united, may respond to evil with good".
PRESS Release from Diocese of Nice:
It is with the greatest emotion that I have just learned of the tragedy which strikes this morning in the Christian community of the Alpes-Maritimes. And once again the city of Nice.
As I write these lines, it appears that three people have been the victims of a heinous terrorist act within and around the walls of Notre Dame Basilica, days after the savage murder of Professor Samuel Paty.
Only a few weeks after the devastating passage of the storm Alex, my emotion can only be strong after this new tragedy which mourns our diocese.
My sadness is infinite as a human being in front of what other beings, called humans, can do.
At this time, all the churches in Nice are closed until further notice, and placed under police protection.
All my prayers go out to the victims, their loved ones, the law enforcement agencies on the front lines of this tragedy, priests and faithful wounded in their faith and hope.
May Christ's spirit of forgiveness prevail in the face of these barbaric acts.
Source: https://notredame-nice.com/communique-de-mgr-andre-marceau/
Press Release from the Bishops of France:
The murders perpetrated this morning in Nice in the Basilica of Notre-Dame plunge the Conference of Bishops of France into immense sadness. Our thoughts and prayers are with the victims, the injured, their families and loved ones. It was because they were in the Basilica that these people were attacked, murdered. They represented a symbol to be destroyed.
These assassinations remind us of the martyrdom of Father Jacques Hamel. Through these horrific acts, our entire country is affected. This terrorism aims to instill anxiety throughout our society. It is urgent that this gangrene be stopped as it is urgent that we find the indispensable brotherhood that will hold us all upright in the face of these threats.
Despite the pain that grips them, Catholics refuse to give in to fear and, with the whole nation, want to face this treacherous and blind threat.
Wherever possible, the death knell for the churches of France will sound today at 3 p.m. Catholics will be invited to a prayer for the victims.
Source: https://eglise.catholique.fr/espace-presse/communiques-de-presse/507635-malgre-douleur-faire-face-a-cette-menace-traitre-aveugle/